The first day of my winter jaunt revealed a forgotten outpost of Viking activity in Ocean City, Maryland—or, as I’m now calling it, New South Vinland.

When the sun rose on day two, I beheld an even more astonishing sight: Muslims and Christians uniting against a common foe.

On the east side of North Baltimore Avenue is this oasis for weary mujaheddin:

On the west side is a hospice for homesick Crusaders: 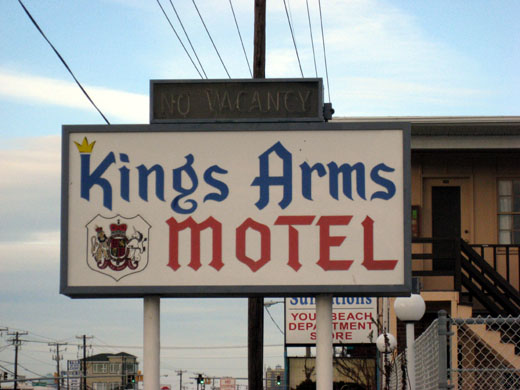 These people aren’t fooling around. Their sign bears the coat of arms of the United Kingdom and there’s a crown on the K.

Wait—what’s that structure rising from a nearby parking lot?

A shop that sells string and sealing wax, and other fancy stuff?

Why would the high priests of miniature golf build such an unholy structure (apparently from pre-Columbian spolia) and summon these minions of chaos?

Look: this dragon is so dangerous, the other dragons keep him in a cage.

This dragon lives in fear of the day the other dragons discover he’s really just a snake.

This dragon is the kind of cringingly un-selfaware monster who declares he’s eager to “have you for dinner,” after which that orange suck-up behind him cackles as if he said something hilarious.

Storm-clouds gather. Darkness falls. The last dim battle between dragon and man beginneth here, and the mists of death shall sweep over land and sea.

And then everyone will adjourn to eat non-pareils at the nearest Candy Kitchen…but that’s a much less dramatic story.