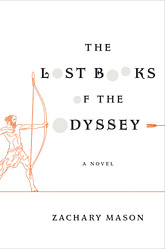 As much as C.F. Cavafy would nag me to focus on the voyage rather than the destination, some straits are best sailed through quickly. Behold this Wall Street Journal article about The Lost Books of The Odyssey:

The author of a new novel that re-imagines Homer’s “Odyssey” isn’t a classicist or a literary scholar. Zachary Mason, 35, currently works as a computer scientist specializing in artificial intelligence at a small start-up in Silicon Valley.

Let’s sit on the sand and ponder this trireme full of waterlogged assumptions. Do most readers who browse the Web or still pick up a newspaper believe that only classicists and lit scholars use ancient epics as creative springboards? That Homer belongs to professors? Even though one of Homer’s best-reviewed “re-imaginers” can’t read a word of Greek?

Or are we to be surprised that a computer scientist wants to re-tell The Odyssey? Everyone knows that people who ponder artificial intelligence for a living are incurious louts who never read outside their field. All that boring technical stuff is useless on the windy plain of Literature, where the spears of touchy shatter on the burnished shields of feely.

But I’ll not read the reporter’s mind. Maybe I’m misunderstanding the assumptions she presumes we share.

The unlikely authorship is one of several unusual details…

Or maybe I’m not. Next paragraph.

Mr. Mason has never set foot in a writing workshop…

Many novelists never do. People who read are not surprised by this.

The book’s “unlikely authorship” having been established, the article dazzles us with details:

The story of how “The Lost Books” came together is an odyssey in its own right. Mr. Mason, who says he has long been inspired by Odysseus’s story, but has no formal training in the classics…

Mason wrote for six years; got no response from literary agents; was published by a small press; then gained wider notice after winning an award. No doubt the process was frustrating, but there are far less direct routes to literary fame. I’m pleased by Mason’s success, but not even a weatherman flailing for a segue would call it an “odyssey.”

And in case you forgot, there it is again: “no formal training in the classics.” Yes, non-classicists seeking inspiration in The Odyssey is unthinkable.

I don’t know why newspapers and magazines talk down to their readers like this, but even a cyclops wouldn’t so badly misperceive the gulf between a book-savvy readership and the rusty tropes a reporter is expected to marshal when writing about authors. The world is wider than our own experiences, and it offers as many routes to publication as there are books, or interpretations of Cream songs. Like Mason’s novel, an author profile should re-tell a story with a fond, familiar theme: good writers come from everywhere.

6 thoughts on ““Tiny purple fishes run laughing through your fingers…””