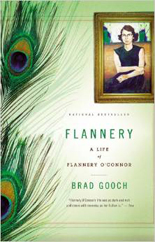 “Perhaps I have created a medieval study,” wondered Flannery O’Connor in 1960 after a professor of medieval literature penned a piece in a Catholic magazine that likened her novel The Violent Bear It Away to the movie The Seventh Seal. Sharing the essay with a friend, O’Connor was bemused: “Which reminds me, have you seen any films by this man Ingmar Bergman? People tell me they are mighty fine & that I would like them. They too are apparently medieval.”

I wonder, then, what O’Connor, a rigorous Catholic, would have made of the news that the Episcopalians just made her a literary saint:

This week, Flannery O’Connor was inducted into the American Poets Corner at St. John the Divine, the “only shrine to American literature in the country” (or so a church representative told me). Upon entering the cathedral for the small induction ceremony, attendees were greeted by two gigantic, sparkling sculptures suspended from the ceiling—they are phoenixes, part of an installation by the Chinese artist Xu Bing, but at first glance you might mistake them for peacocks, like the ones that O’Connor raised on her family’s Georgia farm, Andalusia . . . Those who spoke during the ceremony stood in front of a shining cross, towering choir stalls, and giant pillars illuminated with glowing yellow lights. A booming echo made them sound like somewhat unintelligible voices from beyond. The effect was fitting, evoking simultaneously O’Connor’s keen sense of the ominous, the numinous, and the ironic.

I don’t know if O’Connor visited the magnificent cathedral when she lived in New York City for a while in 1949. As a Catholic, she might have found modern Protestant cathedral-building a marvelous, misguided quest for transcendence, but the vast Gothic interior also might have engaged her intellect and gladdened her soul. After all, O’Connor grew up across the street from a gargoyle-festooned cathedral in Savannah and later lived on a farm called Andalusia, a name she encouraged her mother to restore. It’s been a while since she was seen only as a “Southern Gothic” writer; she also deserves to be remembered as a committed American medievalist.

By the time O’Connor attended college in 1942, her medievalism was apparent. She wrote poetry only briefly, but her later dismissal of her own juvenalia is knowing and sly. “All of my poems sounded like ‘Miniver Cheevy,'” she quipped, recalling the pathetic drunk in E.A. Robinson’s 1910 poem who wishes he’d been born in an age of chivalry. As an adult, she had little interest in romance and legend: Her philosophy professor would recall how much she hated the irreligious dismissal of the Middle Ages in the textbook he assigned, how passionately she studied the work of St. Thomas Aquinas, and how keen she was to debate with him when he argued, from an anthropological perspective, that medieval Christianity was polytheistic.

“She knew Aquinas in detail, was amazingly well read in earlier philosophy, and developed into a first-rate ‘intellectual’ along with her other accomplishments,” George Beiswanger later wrote. “It soon became clear to me that she was a ‘born’ writer and that she was going that way.” Beiswanger took such pleasure in their sparring that he recommended her to his alma mater, the University of Iowa, and helped her land a scholarship for graduate school.

In 1948, while wandering the grounds of Yaddo, O’Connor described herself to other artists at the colony as “thirteenth century” as she immersed herself in a book on scholasticism and medieval art by French Thomist Jacques Maritain. “Do not make the absurd attempt to sever in yourself the artist and the Christian”—she underlined that passage in Maritain’s book, and when she visited the Cloisters during her stint in New York City the following year, she was amazed to find support for Maritain’s exhortation in a Virgin and Child statue that showed both figures laughing—”not smiling,” she emphasized to a friend, “laughing.”

While writing her first novel, O’Connor read the lives of three female saints—Catherine of Siena, Catherine of Genoa, and Teresa of Avila—and was irked when the public found the resulting book pessimistic rather than comic. “Everybody who has read Wise Blood thinks I’m a hillbilly nihilist,” she told a friend, “whereas I would like to create the impression over the television that I’m a hillbilly Thomist.” Fascinated and challenged by the prolific saint, she joked about applying Thomist principles to the least events in daily life, including her mother scolding her to go to bed during her nightly readings:

If my mother were to come in during this process and say, “Turn off that light. It’s late,” I with lifted finger and broad bland beatific expression, would reply, “On the contrary, I answer that the light, being external and limitless, cannot be turned off. Shut your eyes,” or some such thing.

Soon after she was diagnosed with the lupus that would destroy her kidneys, O’Connor made two commitments: the first, to write like mad; the second, less formally, to St. Thomas Aquinas himself. In 1953, O’Connor purchased the 690-page Modern Library volume of selections from his work—and settled in for the rest of her life.

As she hobbled around Andalusia on the crutches she called “flying buttresses” and immersed herself nightly in Thomistic theology, O’Connor did what other medievalists do, from malevolent nationalists to benign reenactors: She redacted the Middle Ages down to the aspects that gave her full purpose and strength.

As for being enshrined as a poet by Episcopalians in an unfinished Gothic cathedral in Manhattan, O’Connor was too Southern to have told them that she was anything but flattered but also too Catholic not to have issued gleeful theological challenges to priests who would have stammered and sought for rejoinders in vain. Then, in private, mindful of her favorite statues, she would have laughed, and let her amusement linger long after the light went out.