“The old year limps to its grave, ashamed,” mutters some uncomfortable actor in Sword of the Valiant, a movie that’s otherwise hard to recommend for either its eloquence or its insight. At first, I thought Christopher Howse’s review of the new Medieval and Renaissance Galleries at the Victoria and Albert Museum might prove to be an equally hollow endorsement of all things medieval, especialle because Howse embarrasses himself by howling about television, sneakers, and Kids These Days.

But then, with crusty wit, he writes this:

Thus it was, at the V&A, that as I stood in front of a splendid five-foot painted and gilt statue of St Roche and his dog (from about 1540), two women came up and glanced at it. “I like the dog,” said one. “He’s licking his leg,” said the other, and they moved on.

In 1540, every peasant or Cockney in Christendom knew all about St Roche. They could see not only the statue but also what it was about: the saint of the plague years, whose dog licked his sores and brought him bread. For it was always a libel to call stained-glass windows “the Bible of the poor”. The poor might not be able to read. But they knew their Bible and saints’ lives, or they’d never have been able to make out what the pictures meant. Modern tourists are more ignorant and purblind than the most sore-smeared Chaucerian beggar.

Today, what we wear is ugly, though the meanest medieval labourer wore hand-made clothes. We can’t name the stars, except the ones we see on TV. We can read, but can’t be bothered to. We save time by driving, only to lose it by slumping on the sofa. We can’t sing, can’t dance, can’t paint and can’t drink politely in company. Yet we have the childish gall to patronise past centuries as inferiors.

In Howse’s place, I might not have so readily drowned my opinion in a cauldron of molten snide nor so openly pined for medieval ways. Even so, whether medieval people infuriate or intrigue you, the full range of their humanity is worth remembering, especially on New Year’s Eve. Janus, after all, has two faces; the one that looks backwards sees truths that the other face still needs to know.

…and so a new week dawns in small-town Louisiana, where by all accounts, medievalism is dead, I tell you. Dead!

There are certainly no traces of it at this castle in New Orleans. 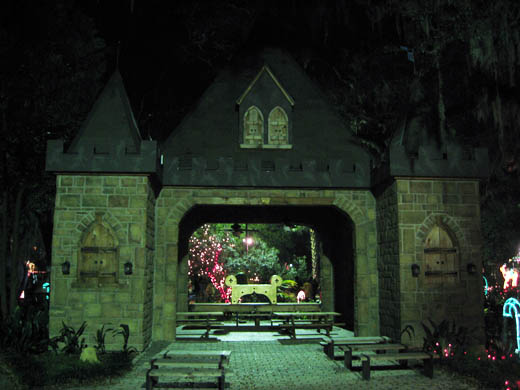 Nor in the suburbs.

Nor as we pass through a hamlet that every medievalist knows was named for the patron saint of, um… 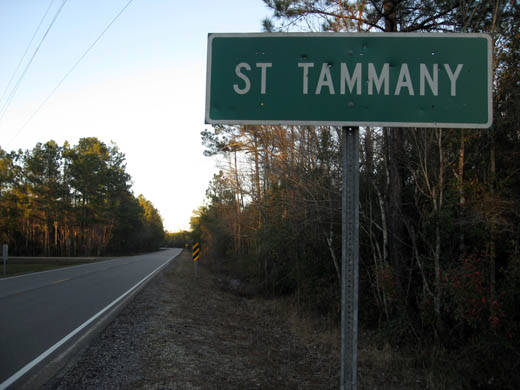 Isn’t there anyone who knows what medievalism is all about?

Help me, O gigantic new relief of St. Anselm of Canterbury at the local Catholic church! 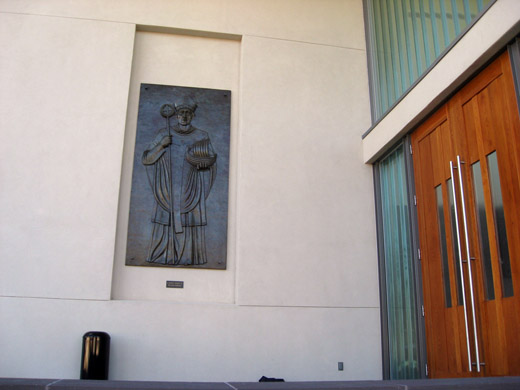 Whither medievalism? On the long, lonely interstate?

“It’s a clear case,” Alcuin once wrote to Charlemagne about winter portents, “because all the children know they’re sliding down into the valley; they’re all slipping on the same snow.” As baffling as I’ve always found that cryptic and much-debated statement, I do know this: “Quid Plura?” increased its readership in 2009, even though updates were sporadic and the content increasingly eccentric.

So whether you’re a new reader or an old one, I thank you for checking in—and for continuing to make this little site worth writing.

The year began with a surprising discovery: a medieval poem translated by both Langston Hughes and T.S. Eliot. (I could scarcely believe it myself.)

Most popular post of the year, without question: an appreciation of the Pogues.

Of interest only to me, perhaps: connecting the banking crisis in Iceland to the medieval founders of Reykjavik.

Amid much fanfare, I invented a new soft drink: galangal ale.

Meanwhile, my open letter to the Sci-Fi Channel went unanswered.

Did Charlemagne say “to have another language is to possess a second soul”? Probably not, and I’m not sure the quip is even true.

Medievalism turned up in wonderful places: Polish medievalism in Central Park, Welsh medievalism on the National Mall, and Louisiana medievalism both unfiltered and filtered through Longfellow and represented by a riot of statues. Later, King Arthur reigned in suburban Virginia and hobbits were in grave danger in Ocean City, Maryland.

Oh, and we saw medievalism on General Hospital. (Seriously!)

Two Romanesque arches converged on a Maryland highway, and that, at least for bus passengers, has made all the difference.

If you need an expert on Viking weapons and combat, then have I got a guy for you.

Much purchased, little read: Tolkien’s Legend of Sigurd and Gudrun and its Wagnerian connection.

Everyone praised The Brief Wondrous Life of Oscar Wao as a Dominican-American story, but it’s more than that: it’s also a New Jersey novel.

When you commit to reviewing all non-Prydain books by Lloyd Alexander, you get to read charming rarities like Janine is French.

When you’re preparing to teach Modern Science Fiction and Fantasy, old books scurry back into your life. You have to settle on teachable novels and stories and see Internet history in dog-eared pulps.

What should you do if you spot a gargoyle on a neighbor’s roof? Why, you write a poem about the creature, of course. The same holds true if you meet a wild boar or eavesdrop on an octopus reassessing her love for a lobster.

So you’re cruising through suburban Maryland on a rainy Sunday afternoon. Daylight is fading, just as a semester spent focused on fantasy and science fiction is drawing to a close, and you idly wonder what you can do to steer your blog back to its original focus on medieval literature and unexpected manifestations of medievalism in everyday life. You round a bend, intent on little more than reaching the Korean supermarket before it closes, and—

Behind those trees…can that really be a textbook example of Romanesque vaulting?

And can it really be standing on the corner of Medieval Avenue and Renaissance Lane?

Okay, that last detail is wishful thinking. But check out this intriguingly unnecessary structure at the entrance to an otherwise unremarkable townhouse development on Randolph Road.

What’s that, you say? A mere arch? Well, look closer. 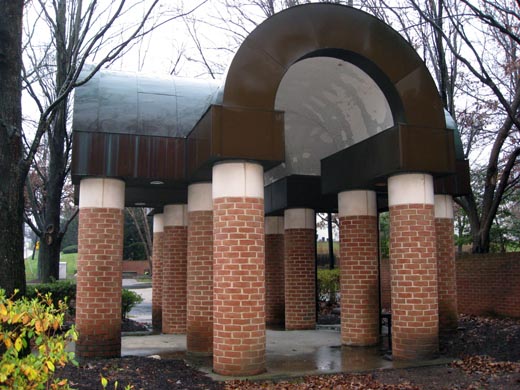 Yep, two barrel vaults intersecting, like in the textbook drawing—and just like in many Roman buildings and countless medieval and Renaissance churches (thus achieving the effect which Vasari famously dubbed “criss-cross applesauce”). The major difference here is that the architectural features, including those blank capitals, have been recast in the idiom of a circa-1988 shopping mall.

But lift your eyes above the lintel… 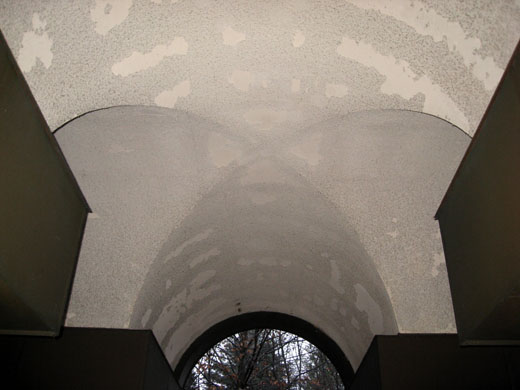 …a good, old-fashioned groined vault. (You in the back, stop giggling.)

I don’t know why an architect decided to evoke the history of his profession here, with this whimper of traditional whimsy, in front of a subdivision that bears no other mark of architectural distinction.

However, this Romanesque doodad does serve a practical purpose. When it’s raining, you can seek shelter… 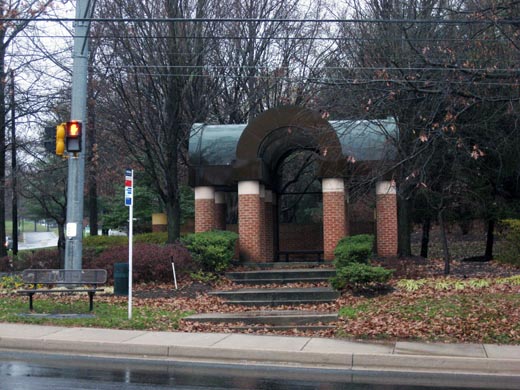 …and wait in grand style for the bus.

Dave at Studenda Mira points out that this bus stop also suggests a tetrapylon, a four-way triumphal arch placed at street junctions in the Roman Empire. Here’s a well-preserved example from Antioch, and here’s another in Jordan.