August has been a whirlwind; fortunately, plenty of people have been pleasantly prolific. The following links don’t always drink beer, but when they do, they prefer Dos Equis.

A Corner of Tenth-Century Europe hosts the latest Carnivalesque, and it’s chock full of medieval goodness.

Issue 13 of The Heroic Age is out, and it includes translations that first appeared as drafts on this blog.

A link courtesy of my mom: New Orleans is celebrating the 30th anniversary of A Confederacy of Dunces.

Jake Seliger (who has his own interesting collection of August links) pointed me to some thoughts about writers and envy.

Neil at Ducks and Drakes shares an anecdote about bugs, museums, and prejudice in Toronto.

August wanderlust got you down? Lost Fort takes you to Xanten.

The history of American illustration being a work in progress, Ian Schoenherr looks into whether Maxfield Parrish studied with Howard Pyle.

Prof Mondo pens an appreciation of the late Michael Been, bassist and vocalist for The Call.

Need some Finnish monster-themed retro metal? Course ya do.

Finally, here’s a 1968 BBC broadcast about The Lord of the Rings with Tolkien interview footage—and lots of very dated talking heads.

This cavewoman and her baby make for a vivid pair nearly 200 feet above the cathedral’s north lawn. She’s hard to see; the chip on her shoulder is hard to miss.

I’ve no gold cups       to catch your shrieks
And noises foul,       no nailing rock
Where cronish faces      fade, and matrons
Remoulded as maidens     mourn so gleefully
The babe whose face      they fouled with runes.
No—grear my mouth      and gray my eyes,
And shriv’ling hairs       in handfuls twine;
Time is a rot-wyrm       that riddles us through
And broods in its hole      upon our brighter days
But shares secrets       mere seeresses hide.
All this I owe you;      I own nothing more.
The work of the world      fathers wolfish brats,
But hold your ground.     Heroes will loathe you,
Knowing they need you,    lest no one forge
Prurient tales     from pride alone
Nor string a song    from strokeworn beards.
Behold how hall-thugs    hungry for butchery
Score rusty sword-tips     ’round scabs, hearing
Echoes of Caindom        in all but their own.
Rave when one belches      some rum-ram-ruf lay;
His bones will break.    Just bide your time.
Thole and thrive, son,    throughout dull days;
You’ve naught to fear.    Face them, beaming.
Swive or just sing with them.    Savor their smell.
Their bile, rising,     my boy, you’ll taste,
And soon you’ll crave     their crawling flesh,
And late you’ll drain     their draughts of blood,
And ere the dawn      their oaths they bleat,
Graying faces     greeting the morn
Will gape at your night-work,    noble heroes
Strangled, overthrown,     strawberry-flecked,
Sweet sentinels,     singers of tales,
Wyrd-graven warlords,    woebegone boys.
Peer from the tree line;    try not to gloat,
But make them hear you    howling your name.
All youth survives     in you alone,
So be for me     my bitter angel
Rightfully fated    to rage in the dark.
Motherly lore      will light the gloom:
Like candles touched      to torchwood pyre,
Mere men flicker;    monsters explode. 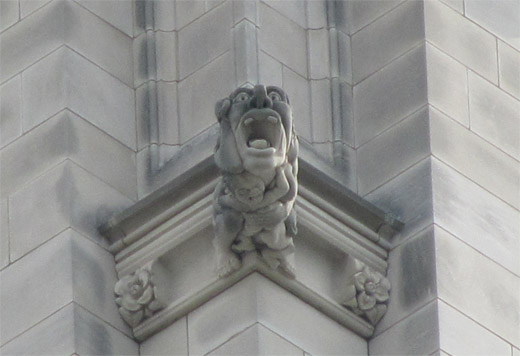 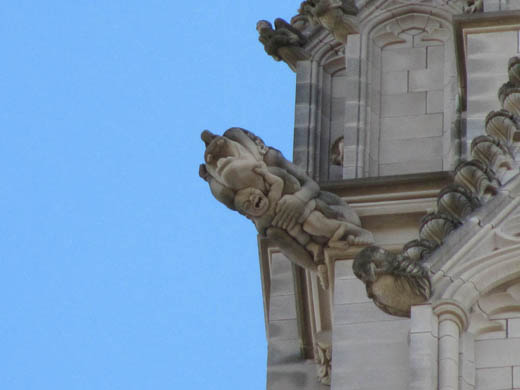 (For all the entries in this series, hit the “looking up” tab.)

On an August afternoon when D.C. is balmy and the news is all nonsense, it’s a nice surprise to wander through the cathedral garden and find queen butterflies swyving.

“Sire Monk, namoore of this, so God yow blesse!
Youre tayle anoyeth al this compaignye.
Swich talkyng is nat worth a boterflye…”
— Geoffrey Chaucer, Prologue to the Nun’s Priest’s Tale

When queen butterflies mate, the male flies around with the female hanging beneath him. It’s quite a sight.

Even squirrels are impressed by that. 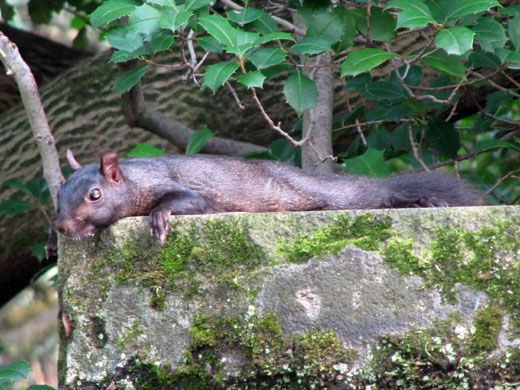 It’s Friday, the D.C. skies are cloudy, but worthy links shine through the murk.

Someone has put the 1963 Caedmon LP of Murder in the Cathedral on YouTube. Performers include Paul Scofield, Cyril Cusack, and Glenda Jackson. The play has been broken into in 11 parts; the first part is here.

Also from YouTube: two-and-a-half minutes from a 1987 production of The Lady’s Not For Burning.

I’ve known the proprietress of Ephemeral New York for 20 years, so she had to know I’d enjoy this book-reading grotesque at City College, an angel on East 14th Street, and weird carvings on Madison Avenue.

At Ferule and Fescue, consider “Facebook, savior of democracy!”

How do you plot a novel? Jake Seliger has some thoughts.

Prof Mondo remembers the literary exploits of Freddy the Pig.

Lynnspace seeks to bend your mind with cows.

Seamus Heaney is a fine poet, but his Beowulf and I have sailed past each other for ten hopeless years. When I skim his translation, I drift, and the audio version only lulls me to sleep, despite its potent brogue. Having failed to enjoy Heaney’s Beowulf as a poem all its own, I had hoped that the book might at least appeal to reluctant readers who’d otherwise flee from medieval lit. Instead, Heaney’s Beowulf is, I’d bet, one of the least-finished bestsellers of the last 25 years, while its omnipresence has overshadowed more recent attempts to draw readers into a lost heroic age.

One such Beowulf, the 2004 Longman Cultural Edition, comes packed with a timeline, a glossary, genealogies, and snippets of primary sources. At its core is a translation by Alan Sullivan and his partner, Timothy Murphy, whose respect for formal poetry dictated the guidelines Sullivan enumerates in his introduction:

(1) It would be written in four-beat lines, like the original, though differing somewhat in metrical detail. (2) It would follow a loosened variant of the Scop’s Rule, alliterating three times in most lines, but using other patterns of alliteration as well. (3) It would employ modern syntax, with some inversion for rhetorical effect. (4) Words of Germanic origin would be chosen preferentially.

Their boundaries set, Sullivan and Murphy spin a translation that evokes the craftsmanship of the original poem without the stringency of an antiquarian exercise. Here’s Beowulf and his men bidding farvel to Denmark:

They boarded their vessel,      breasted the deep,
left Denmark behind.     A halyard hoisted
the sea-wind’s shroud;     the sail was sheeted,
bound to the mast,     and the beams moaned
as a fair wind wafted     the wave-rider forward.
Foamy-throated,     the longboat bounded,
swept on the swells     of the swift sea-stream
until welcoming capes     were sighted ahead,
the cliffs of Geat-land.     The keel grounded
as wind-lift thrust it     straight onto sand.
The harbor-guard hastened     hence from his post.
He had looked long     on an empty ocean
and waited to meet     the much-missed men.

Heaney’s version of this same passage is a lovely bundle of lines—but Heaney, by his own admission, is “less than thorough” regarding meter and confesses that his alliteration “varies from the shadowy to the substantial, from the properly to improperly distributed.” By contrast, Sullivan and Murphy find power in form. Read their translation aloud, as I have since finding it in the library last month, and you hear—and feel—diction constrained by rules and traditions, restlessness evident in every line, the entire translation all the more vibrant and immediate for it.

Over the years, I’ve sometimes dropped by Fresh Bilge, Alan Sullivan’s blog about poetry, religion, politics, weather, and sailing. Since I share only the first of those five interests, I’ve never been one of Sulivan’s regular “rare readers,” but a few weeks ago I went to drop him a note telling him him how much I was enjoying his Beowulf—but I was too late. Alan Sullivan died on July 9, 2010, after a long battle with leukemia.

Blogger Brendan Loy has written a heartfelt appreciation of Alan Sullivan. Here’s Sullivan’s death announcement and obituary, plus a selection of his poetry. Here’s Timothy Murphy conducting a far-ranging interview of Alan Sullivan in Able Muse magazine, in which Sullivan discusses being critiqued by Richard Wilbur and implores would-be poets to pry themselves away from the campus:

I would add a more general comment that introversion and bookishness have harmed the estate of poetry. Teachers who encourage these traits do their students no favors. Better to foster the natural curiosity of the young, press them to acquire general knowledge, demand accuracy and precision in language, and promote monomanias as escape hatches from the self.

That advice, and the above translation of Beowulf’s leave-taking, aren’t a half-bad way for a poet to be remembered: as a man who knew the difference between worda ond worca, and made the best of both.

Medieval romances aren’t sacred texts, but translators often treat them with a reverence that overshadows their sheer entertainment value—so thank goodness for Adam Golaski, who’s grappling with Sir Gawain and the Green Knight in an effort to make the poem his own. Playing Tom Lehrer to Cotton Nero A.x’s “Clementine,” Golaski began posting pieces of Green to the Open Letters Monthly web site in 2008, and OLM recently published the entire first fitt.

Here’s the opening stanza of Green:

Since ceased th’siege + assault upon Troye,

his enemies was tried f’r treachery tho

haunted by shade Dido, was worth th’wonder

by surprise has went therein,

And here’s a bit of the Green Knight’s appearance at Camelot:

Translating medieval poems, whether long works or short, is a cage-match between meaning, meter, and form. Tricky passages drive the disheartened translator to other people’s versions, all of which have their own iffy relationships with the original. Preserving the sound of favorite lines clashes with the need to sacrifice fine medieval details—someone else’s favorite lines—for storytelling, while the manuscript context of the poem gets all the respect of a Carolingian hunchback.

That’s why Green is a hoot. Having developed his own idiom, Adam Golaski doesn’t try to spackle over its seams. He makes deliberately insensible decisions, jamming words together for the sake of sound and using typographic gimmicks to bemuse anyone who tries to read this thing aloud. Every conundrum a translator faces becomes, in Green, a source of amusement; some lines he barely translates at all. Golaksi gleefully defenestrates the needs of teachers, scholars, and students, but his Green makes a point that won’t be lost on medievalists: the original poem is really, wonderfully weird.

(Related “Quid Plura?” posts: a defense of the Gawain-based film Sword of the Valiant and a look at Christopher Logue’s rewriting of the Iliad.)