The Eve of All Hallows draws nigh! Here, dear readers, is a bowl of candy-sweet links, littered with literary razor blades to trouble the tender pink gums of your mind.

Dianne notes that no one’s buying a medieval fake.

Makers of the Middle Ages, covering such souls as Erasmus, Shakespeare, Morris, and Heaney, is now free to download.

The Anglo-Saxon Narrative Poetry Project has translated all of Genesis A and B.

The Book Haven hears out a Russian novelist who aims to turn you off.

Hats & Rabbits weighs the darkness without.

The Era of Casual Fridays explains where “Ozymandius” came from.

First Known When Lost hails the “Dance of the Macabre Mice.”

Bill Peschel laughs at a new scam for authors.

Fenster Moop doubts the fall of the faculty.

George notes the death of the man who made C.

New Jersey residents of a certain age remember a castle by the sea.

I doubted, briefly, à moitié fou, that Louisiana was the most medievalist place in America. Yes, the state is home to the shrine to a French saint, an assortment of monsters and patrons, the castellated capitol that horrified Twain, the medievalist banks of the old Pontchartrain, even the statue of an infamous fictional medievalist—but surely c’est tout?

Au contraire. On a sunny Sunday in October—yesterday, in fact—twenty Cajun knights rode into an industrial park 175 miles northwest of New Orleans, bearing the past beneath perfect blue skies. 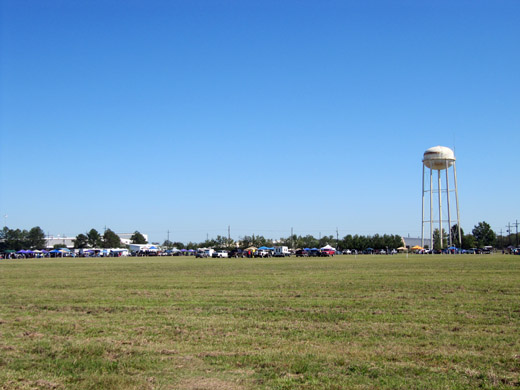 Welcome to the Louisiana Tournoi de la Ville Platte, held in the seat of Evangeline Parish on the closing day of the Louisiana Cotton Festival. Across three rounds, twenty competitors—the Knights of Cotton—run a semicircular course, using a lance to snag rings hanging from posts that stand for the seven enemies of cotton: Flood, Drought, Silk, Boll Weevil, Boll Worm, Rayon, Nylon, and Silk.

Each run takes between 12 and 20 seconds, and each lanced ring knocks 10 points off a starting score of 210. Officials average each rider’s time, multiply it by 5, then divide it by 3, and then add it to the ring score. The competitor with the lowest score wins. 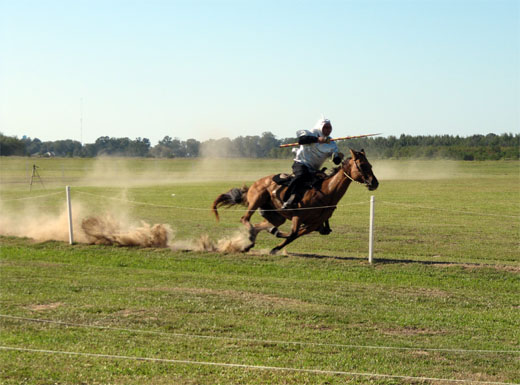 What’s fascinating about the Tournoi is that it evolved independent of other recent medievalist traditions that look so much like it. The Tournoi is no Renaissance festival, nor is there the slightest whiff of historical reenactment or genre-fiction whimsy. Instead, it’s a hyper-local sporting event, complete with country music, color commentary on the radio, and tailgating. 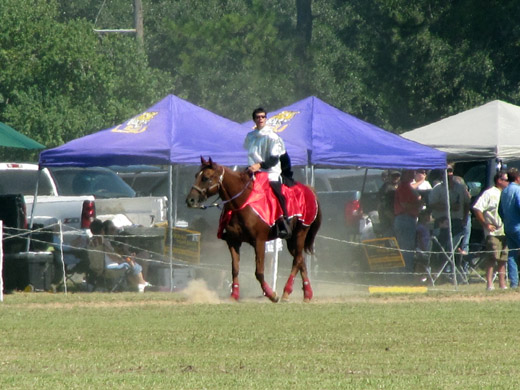 If you show up in a car rather than a truck, and without a tent, a grill, and beverages, everyone will spot you as the lone out-of-towner.

According to the Tournoi’s web site, the first mayor of Ville Platte brought the ring joust to town in the early 19th century. The sport enjoyed a 90-year run, then locals revived it after World War II.

As documented by Esther J. Crooks and Ruth W. Crooks in their 1936 book The Ring Tournament in the United States, chivalric contests based on medieval tournaments once drew thousands of spectators. After the Civil War, mayors from Virginia to Mississippi counted on guest appearances by Robert E. Lee, P.G.T. Beauregard, Nathan Bedford Forrest, and other big-name vets to raise money for widows, orphans, and monuments to the dead. The Crookses cite a strong interest in the sport in Cajun country, where the Acadians had a tradition of breeding saddle horses and ponies dating to at least the mid-18th century.

Ville Platte, in most regards a deeply traditional town, seems indifferent to the old Southern obsession with the Middle Ages that birthed the Tournoi. Modern medievalism often comes bundled with anxiety about “authenticity”; the Tournoi just shrugs. Behold: a four-wheeler smoothing the track with a giant rake ballasted by an idle knight—a medieval Cajun zamboni.

You can see jousting at Renaissance fairs, and there’s even a National Jousting Association, but the good people of Ville Platte ride on regardless. Adapting a medieval tournament to modern sports culture, they rest in shady pavilions and wear t-shirts in the color of their favorite knight, keeping both eyes on the ring-joust even as they keep one ear on radios blaring the Saints game. When you ask them if anyone ever brings in a “ringer” from outside, they laugh. “No one outside of here does this!” insisted a friendly man parked next to us, burgers ablaze on his grill. “If anyone does this, I’d sure like to know.”

Before the Civil War, Richmond was, in the words of historian Rollin Osterweis, the “intellectual headquarters” of the upper South. In days of yore, it was also, not by chance, the regional capital of trendy medievalism.

In a state formed by the manners and patterns of English life, the Richmond-based Southern Literary Messenger (edited by Edgar Allan Poe) reinforced the romanticism of its readers by treating them to Gothic yarns, the pageantry of Sir Walter Scott, the thought of Thomas Carlyle, and, in the twenty years before the Civil War, mountains of chivalric poems. The wealthy in and around antebellum Richmond adored chivalric pageants and tournaments; by the 1850s, writes Osterweis, “[i]nstead of longing awkwardly for the days of knighthood, the gentry is now convinced that it is living in them.” 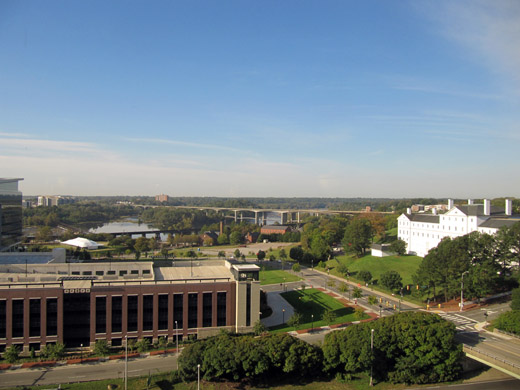 This weekend, I was honored to be a guest at the annual James River Writers Conference, an event hosted by what may be the most hospitable writers’ group in the country. New to a city that was once obsessed with knighthood, courtliness, and English heritage, I took advantage of glorious weather to track down charming traces of old, neo-medieval Richmond.

Crammed between newer buildings on 5th Street is the Second Presbyterian Church, completed in 1848. Here, we’re told, the first pastor “proclaimed that he was ‘tired of Grecian temples with spires on them'” and “determined to build the first Gothic church in Richmond, a city noted for its classic Greek architecture. His building committee persuaded the noted New York Architect Minard Lafever, one of the leading masters of the Gothic Revival in America, to design the building.” 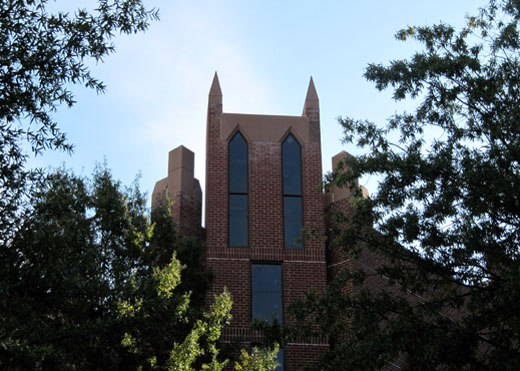 Old buildings in Richmond favor classical and Federal styles intermingled with eclectic Victoriana, but on the eastern edge of Monument Avenue, Jeb Stuart, statuesque, presides over a Gothic revival. 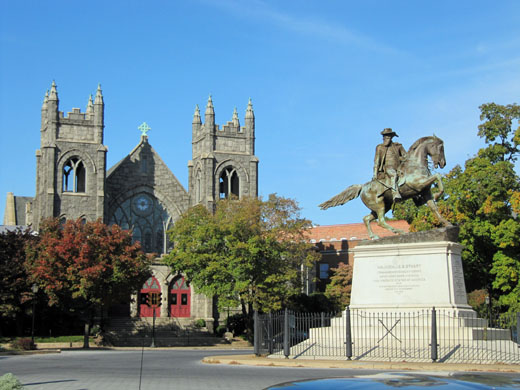 It’s the right assignment for a general whose biographer calls him “the Confederacy’s knight-errant . . . Amid a slaughterhouse, he had embodied chivalry, clinging to the pageantry of a long-gone warrior. He crafted the image carefully, and the image befitted him. He saw himself as the Southern people envisaged him. They needed a knight; he needed to be that knight.”

Around the statue of Stuart rise the First English Lutheran Church (above), St. John’s UCC (below), and Grace Covenant Presbyterian (photo).

Here, the Gothic fought the Federal to a standstill, if only in facades.

On the north end of town, at Union Presbyterian Seminary, whimsy is the prime mover at Watts Hall, designed by Charles H. Read and built in 1897. Gleefully asymmetrical, Watts is one of those buildings that gets weirder the longer you look at it.

With its buttresses and blind triforium (those little rows of fake indented windows), its chapel could, at first glance, almost pass for medieval, but for that clock tower…

…and the quatrefoil-mad chimneys with wild Corinthian capitals.

Still, one terrific detail on the front of Watts Hall is all-American Gothic, perhaps befitting an age in which religious architecture is no longer a prominent carrier for medievalist ideas: 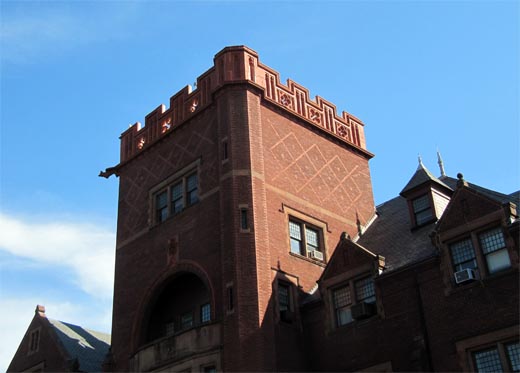 A lone grotesque, fleeing the scourge of theology.