I doubted, briefly, à moitié fou, that Louisiana was the most medievalist place in America. Yes, the state is home to the shrine to a French saint, an assortment of monsters and patrons, the castellated capitol that horrified Twain, the medievalist banks of the old Pontchartrain, even the statue of an infamous fictional medievalist—but surely c’est tout?

Au contraire. On a sunny Sunday in October—yesterday, in fact—twenty Cajun knights rode into an industrial park 175 miles northwest of New Orleans, bearing the past beneath perfect blue skies.

Welcome to the Louisiana Tournoi de la Ville Platte, held in the seat of Evangeline Parish on the closing day of the Louisiana Cotton Festival. Across three rounds, twenty competitors—the Knights of Cotton—run a semicircular course, using a lance to snag rings hanging from posts that stand for the seven enemies of cotton: Flood, Drought, Silk, Boll Weevil, Boll Worm, Rayon, Nylon, and Silk. 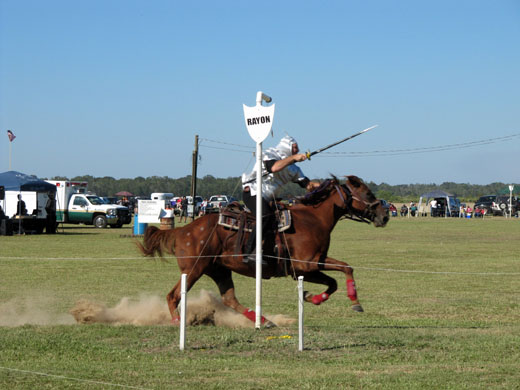 Each run takes between 12 and 20 seconds, and each lanced ring knocks 10 points off a starting score of 210. Officials average each rider’s time, multiply it by 5, then divide it by 3, and then add it to the ring score. The competitor with the lowest score wins.

What’s fascinating about the Tournoi is that it evolved independent of other recent medievalist traditions that look so much like it. The Tournoi is no Renaissance festival, nor is there the slightest whiff of historical reenactment or genre-fiction whimsy. Instead, it’s a hyper-local sporting event, complete with country music, color commentary on the radio, and tailgating.

If you show up in a car rather than a truck, and without a tent, a grill, and beverages, everyone will spot you as the lone out-of-towner.

According to the Tournoi’s web site, the first mayor of Ville Platte brought the ring joust to town in the early 19th century. The sport enjoyed a 90-year run, then locals revived it after World War II.

As documented by Esther J. Crooks and Ruth W. Crooks in their 1936 book The Ring Tournament in the United States, chivalric contests based on medieval tournaments once drew thousands of spectators. After the Civil War, mayors from Virginia to Mississippi counted on guest appearances by Robert E. Lee, P.G.T. Beauregard, Nathan Bedford Forrest, and other big-name vets to raise money for widows, orphans, and monuments to the dead. The Crookses cite a strong interest in the sport in Cajun country, where the Acadians had a tradition of breeding saddle horses and ponies dating to at least the mid-18th century.

Ville Platte, in most regards a deeply traditional town, seems indifferent to the old Southern obsession with the Middle Ages that birthed the Tournoi. Modern medievalism often comes bundled with anxiety about “authenticity”; the Tournoi just shrugs. Behold: a four-wheeler smoothing the track with a giant rake ballasted by an idle knight—a medieval Cajun zamboni.

You can see jousting at Renaissance fairs, and there’s even a National Jousting Association, but the good people of Ville Platte ride on regardless. Adapting a medieval tournament to modern sports culture, they rest in shady pavilions and wear t-shirts in the color of their favorite knight, keeping both eyes on the ring-joust even as they keep one ear on radios blaring the Saints game. When you ask them if anyone ever brings in a “ringer” from outside, they laugh. “No one outside of here does this!” insisted a friendly man parked next to us, burgers ablaze on his grill. “If anyone does this, I’d sure like to know.” 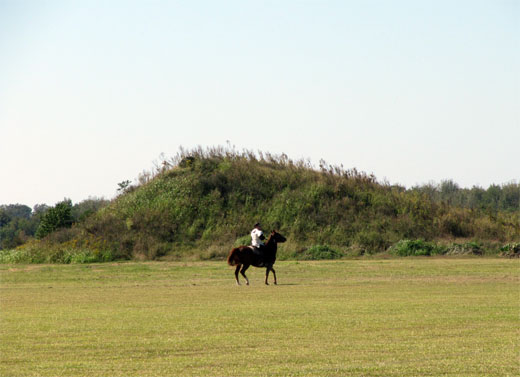 4 thoughts on ““…to get a little conversation, drink a little red wine…””