The books are tired: They let themselves yellow, they reek of teenage habits, and they laze around the shelves as if they own them. Stone-faced, you say: You there, all of you: Goodbye. With soft groans, they sprout little legs, stumble down the stairs, and march away. You admire their sense of duty; you commend yourself for knowing how to treat them.

You wonder where they went only years later, when an email asks: “Would you like to teach Modern Fantasy and Science Fiction?”

Thus begins the blur: creeping through library basements, climbing over warehouse piles, swinging a sun-bright shopping basket where books replace groceries in long, looming rows. Look: A spaceship reminds you of a long-lost friend, the guy who once loaned you this book. Over there is the novel you never quite got; its crude, trippy cover still mocks you. A fantasy trilogy leaps from a shelf, desperate to be held again; years ago, you all spent a week at the beach. Paperbacks peep and cry out sideways, and people gawk as titles start to blur: Axaxaxas mlö, dhcmrlchtdj…

You bring them home in plastic bags.

That face you make as you drive? It’s the thousand-year stare, the result of looking too long at the Middle Ages. The cure is a holiday, a summer spent sniffing ’round the future—but when you come home and toss those bags on the floor, they rustle, and you look down. Some books squeak and hide under the sofa; others dance and do flips before clambering onto your shelves. In the chaos, you catch a whiff: musty, sure, but sweetly familiar, and you know that you’re not in the future at all. You draw a deep breath and you think, Well, I’m back.

At Writer Beware!, Victoria Strauss compiles recent links about the business of writing.

Strange Horizons tells aspiring writers the “stories we’ve seen too often.” So does Clarkesworld: “stories about young kids playing in some field and discovering ANYTHING. (a body, an alien craft, Excalibur, ANYTHING).”

Jason Fisher explains “the Lewis/Tolkien collaboration that might have been (but never was).”

Steven Till points us to John Crowley on the art of historical fiction.

This is the forest primeval. The murmuring crawfish, bearded with moss…

“But Jeff,” I hear yon straw man cry, “it’s been ages since you reaffirmed your obsession with literary and quasi-medieval statuary!” Indeed, the greatest truths are often the most lamentable. So look who reared his head (and a fragment of torso) today along the bayou in St. Martinville, Louisiana: None other than “Hexameter Hank” Longfellow, author of Evangeline, the epic poem that made Cajun history hip. 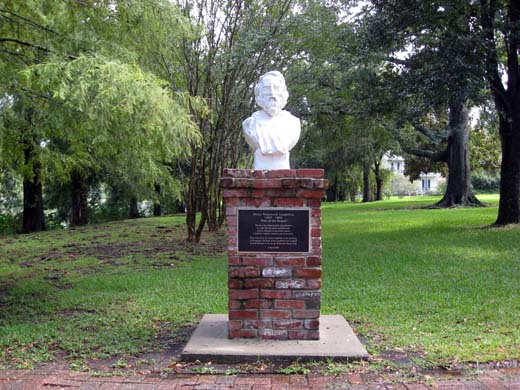 In St. Martinville, Longfellow keeps watchs over the “Evangeline Oak,” which offers ample shade just down the road from the Longfellow-Evangeline State Historic Site and a few paces from the lovely Acadian Memorial and Museum.

A block away, in the cemetery of the “mother church” of the Cajuns, is Evangeline herself, looking more sanguine than I’d be after decades of roaming North America in the name of deathless love. As bestsellers go, the poem that bears Evangeline’s name was the Twilight of yesteryear, but these days she gets fewer visitors.

St. Martinville boasts a population of 6,989, but half of those residents appear to be statues. In front of the church stands A.M. Jan, the 19th-century pastor, on a pedestal that tells his story in Latin.

Also honored in the town square is this dapper Attakapa Indian. He’s been here since 1961. 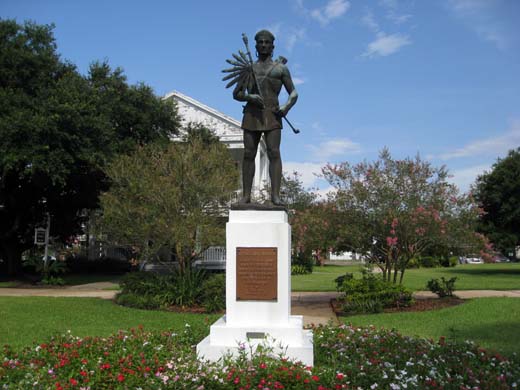 The interior of the church—”it is just the same as when it was built,” a plaque insists, “having been repaired but not changed”—is naturally full of old statues, too many to name.

…and our old pal from New Orleans, St. Roch. 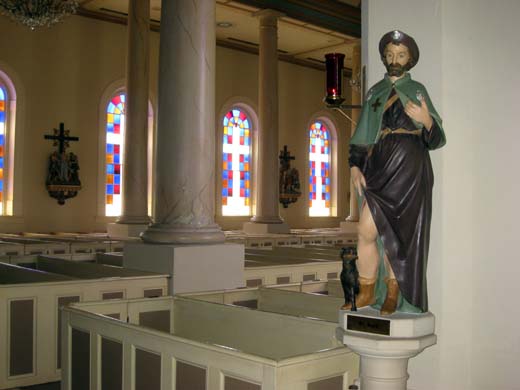 Aha! Here’s St. Martin of Tours, inventing the word “chapel” in front of the old presbytère. 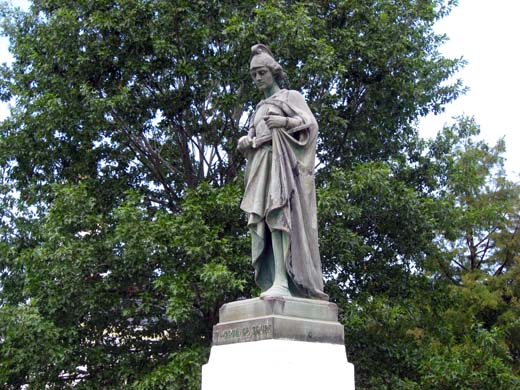 Alas, my camera fizzled before I could get a picture of St. Martinville’s one truly unmissable statue, which depicts Charlemagne engaged in mortal combat with a giant crawfish. I’m sorry you won’t be able to see it, but trust me, dear reader: It was awesome.

The National Mall on the Fourth of July: America! Motherhood! Hot lunch for orphans! Red, white, and blue! Patriotic explosions!

…and a Welsh woman retelling stories from The Mabinogion?

Yep: Wales is one of the three cultures featured at this year’s Smithsonian Folklife Festival. If you’re local, it’s not too late to hie thyself down to the Mall and take in some music, storytelling, crafts, and food. Maybe you’ll even get to hear spirited retellings of the stories of Branwen and Rhiannon adorned with violence, humor, and quirky modern digressions. Medievalism, you see, never takes a holiday.

There are now so many good blogs devoted to covering aspects of medievalism, from the scholarly to the popular and everything in between, that it’s not always easy for a hapless insomniac to make his mark. That’s why I’m inordinately pleased to be the first to report a crucial piece of quasi-medieval news: General Hospital has just kicked off a storyline about courtly love.

No, really! Someone on YouTube has compiled the relevant clips from the June 30 episode, wherein garrulous geek Damian “The Jackal” Spinelli proposes new rules for his relationship with Maxie Jones. Spinelli has long adored the woman he calls “Maximista,” but only recently has she loved him back. Spinelli and Maxie have already had sex—twice, according to Wikipedia—but the dramatic and chivalrous Spinelli wants to woo his true love properly, even if Maxie ain’t exactly qualified to book passage with St. Ursula, if you know what I mean:

SPINELLI.
Maximista shall remain the queen of The Jackal’s heart, and to honor her luminous beauty and transcendent presence, I will demonstrate my pure and epic devotion through the time-honored tradition of courtly love.

MAXIE.
Spinelli, you’re so amazing. You’ve actually come up with something I’ve never done. So what is this “courtly love,” and who gets to go first?

Watch the five-minute video and you’ll see Spinelli explain (not always accurately) the up side of courtly love, after which Maxie’s step-cousin Robin explains the down side.

If the frustrated English majors who write the other soaps decide to follow suit, we may have a genuine trend on our hands. The troublemakers on One Life to Live might stop stealing each other’s babies and generate real drama by debating notions of inheritance and lordship in The Mabinogion, while Days of Our Lives supercop Bo Brady could very well shelve his investigations of mafia feuds to focus instead on a groundbreaking new theory about the date and composition of Beowulf. Should all this and more come to pass, “Quid Plura?” will be ready to keep you informed—if not with great sentence, then at least with some full measure of solaas.