“When the heck else will we ever get to see this?” With every seasonal email from the American Shakespeare Center, I ask myself this question—and then I gladly make the three-hour trek to Staunton, Virginia, to see a play I’ll never see on any other stage, let alone in a faithful reconstruction of the Blackfriars, Shakespeare’s indoor theater. This time, the play was Henry VI, Part 2, not juilenned in the interest of run time or mashed up with other plays in the trilogy but staged in its entirety as part of a three-year “War of the Roses” event—and marketed, cheekily, as “The Rise of Queen Margaret.”

Henry VI, Part 2 isn’t subtle or artfully written, but the Blackfriars players make it fun just to see the damned thing at all. In the current production, which runs through November, Chris Johnston nails his role as Henry, a pious doofus who’s out of his depth. Alison Glenzer (who was haunting as the Jailer’s Daughter in The Two Noble Kinsmen in 2013) gives the cheating, scheming Queen Margaret unexpected heart and soul; no one laughs as she cradles the severed head of her lover. Rene Thornton, Jr., does double duty as both a hounded, frazzled Gloucester and, late in the play, the future Richard III, gleefully wielding a spiked and shielded crutch. ASC newcomer Jessika Williams is subtle and poignant as Gloucester’s wife, Eleanor, whose tenderly depicted marriage falls apart when political winds blow ill. The preposterously versatile John Harrell (who cracked me up in Ben Jonson’s Epicene in 2014) makes a good Duke of York, ambitious and haughty, and earns a blast of applause after a genealogical discourse that’s as effortless as it is endless. And then David Anthony Lewis comes roaring in, as if flung from a Viking mosh pit full of cocaine, to brutalize England as the willfully ignorant rebel Jack Cade.

Those were my favorites, but the truth is, everyone at the Blackfriars is good—because who signs on to play multiple roles in four or five plays per season, four seasons a year, for years at a time, unless they love the theater more than they love sleep, leisure, or life itself? The actors also introduce each performance, sell raffle tickets, play songs at intermission, and handle the on-stage concessions. Their bios in the playbill all include a line like “more than 123 roles in 99 productions”—a staggering claim when few of them seem older than 40. I can’t imagine that there are more dedicated stage actors anywhere in North America; maybe that’s how they always make American-accented English sound like Shakespeare’s natural voice.

I’ve seen plenty of Shakespeare productions by other, bigger companies, and they’re too often beguiled by novelty: Measure for Measure presented as a nude Weimar cabaret, Two Gentlemen of Verona as special-effects-laden grunge-melodrama with U2-themed karaoke, a drag-queen Taming of the Shrew strained beyond its limits with 18 pop songs by Duncan Sheik. I wince to remember a lifeless All’s Well That Ends Well that ended with the grinning cast, clad in World War I costumes, breaking into a frantic, almost apologetic riverdance.

The folks in Staunton do none of that. They study the play, learn their lines, and then come out on a bare but beautiful stage to interpret their characters almost entirely through voice, motion, and costuming, tight formal constraints that make every performance immediate and real. Despite the breezy atmosphere—including pre-show pop concerts and improvised interactions with audience members, who themselves may be drinking beer or scarfing down gummi bears—their work feels, in its fashion, more respectful of its source material than productions by larger companies. The Blackfriars actors let you see a play for what it is; they make you all the more aware of how other companies can smother a play under sets, lighting, and boffo art direction in the name of “deconstructing,” “reimagining,” or “reinterpreting” it.

The Blackfriars Playhouse celebrates its 15th birthday this month. I can’t imagine a better place to keep filling in the massive gaps in my knowledge of English theater and be entertained with every nutty visit. These folks turn even weak plays into crowd pleasers—and really, who else is going to stage Fletcher and Massinger’s ridiculous 1622 Tempest-inspired, horny-Amazon comedy The Sea Voyage? Where else will you see Beaumont and Fletcher’s naughty-bits stab-fest The Maid’s Tragedy? Happy birthday and congratulations, Blackfriars; I hope this post finds you a few new fans. To swipe the final triumphant line of the play I saw last night: “And more such days as these to us befall!”

What was it like to see a play in the 1590s? The good folks at the Blackfriars Playhouse in Staunton, Virginia, answer that question at least five nights a week, as unflagging actors stage the work of Shakespeare and his contemporaries in a cozy recreation of Shakespeare’s first theater in London. The Blackfriars is now in the throes of its Actors’ Renaissance Season, the annual late-winter whirlwind where a dozen actors direct themselves and play all of the roles in five plays at once, with only a few days to prepare and rehearse. (There’s a prompter nearby, but it’s a sign of the actors’ immersion in their work that they rarely need to “prithee” him.)

This weekend, we drove down to Staunton for two shows: Aphra Behn’s “The Rover,” which taught me a useful new 17th-century exclamation—‘sheartlikins!—and John Webster’s “The White Devil,” a lurid, over-the-top revenge tragedy packed with vivid metaphors and similes about death and the cruel indifference of nature. “But keep the wolf far thence, that’s foe to men, / For with his nails he’ll dig them up again”—T.S. Eliot parodied those lines, and I was startled to hear the originals spoken by a grieving mother; it’s rare to spot a footnote from “The Waste Land” running loose in the wild.

Because I’ve written so much about Charlemagne, I was also surprised to hear a character name-check the Carolingians during one of Webster’s most frantic scenes: Two women think they’re tricking a scoundrel named Flamineo into a complex, three-way suicide pact, but he’s actually tricking them into revealing their falseness by giving them pistols loaded with blanks. As he feigns preparation for death, he muses on his afterlife—so the Blackfriars actor said something like this:

Whither shall I go now? O Lucian, thy ridiculous purgatory! To find Alexander the Great cobbling shoes, and Julius Caesar making hair buttons, and King Pippin crying apples in a cart.

A reference to one of the Pippins, but not Charlemagne? That surprised me, so I looked up the full text of the play, and sure enough, the Big C is right where I thought he would be:

Whither shall I go now? O Lucian thy ridiculous purgatory! To find Alexander the Great cobbling shoes, Pompey tagging points, and Julius Caesar making hair buttons, Hannibal selling blacking, and Augustus crying garlic, Charlemagne selling lists by the dozen, and King Pippin crying apples in a cart drawn with one horse.
Whether I resolve to fire, earth, water, air,
Or all the elements by scruples, I know not
Nor greatly care—Shoot, shoot,
Of all deaths the violent death is best,
Far from ourselves it steals ourselves so fast
The pain once apprehended is quite past.

What intrigued me here is that either the actor, overwhelmed by having to learn five plays at once, skipped over several of the mighty men who are reduced to menial labor in purgatory—or, more likely, he and his castmates cut the play for time, paring down this overwrought passage to the three names an early 21st-century audience might know: Alexander, Julius Caesar, and…Pippin?

Although they all had the same name, Charlemagne’s disfavored hunchback son who inspired the 1972 jazz-hands musical wasn’t the same guy as Charlemagne’s other son Pippin, who ruled Italy, or Charlemagne’s father Pippin, the first Carolingian king. The fact that a Pippin made the cut but Charlemagne didn’t hints at the priorities of theater people, who know the musical but not necessarily the history behind it—but that’s not a complaint. The Blackfriars’ productions are engrossing and smart, historical figures are doomed to whirl ’round Fortune’s wheel, and Webster knew that drawing sustenance from the mouldering past is part of the natural and necessary gloom of life:

Or, like the black and melancholic yew-tree,
Dost think to root thyself in dead men’s graves,
And yet to prosper? 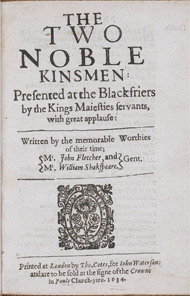 If you’re wont to ask, “Where can I see plays that have rarely been staged for 400 years?”, then hie thyself posthaste anon to Staunton, Virginia, where the American Shakespeare Center reanimates old scripts in a reconstruction of London’s Blackfriars Theater, and under truly humbling conditions: The actors perform in as many as five plays at a time, with multiple roles in each.

We popped down to Staunton this weekend to see The Two Noble Kinsmen, an adaptation of Chaucer’s “Knight’s Tale” by John Fletcher with an assist from William Shakespeare. The play is supposedly “deeply flawed,” but a dozen actors (who directed themselves) made it engaging and sharp. They earned a standing ovation—and propelled the Canterbury pilgrims through the 17th century and onto the sidewalks of a small Virginia town.

With my own ful devout corage, I did what I do in any new place: I hunted for further medievalism. After good finds in other Virginia towns—Williamsburg, Richmond, Annandale, and the imaginary Swallow Barn—I knew Staunton would come through, and it did, just up the hill from the theater.

Welcome to Thornrose Cemetery, designed by Staunton’s own Thomas Jasper Collins, who built eclectic homes and churches throughout his adoptive hometown.

Although Collins never visited Europe, he did (according to James Madison University) study Gothic Revival architecture in Baltimore, Richmond, and Norfolk. Just inside the cemetery gates is a monument to his medievalism: a stocky little keep.

When Collins went medieval by the cemetery walls, his work was striking, if too weighty to be whimsical. 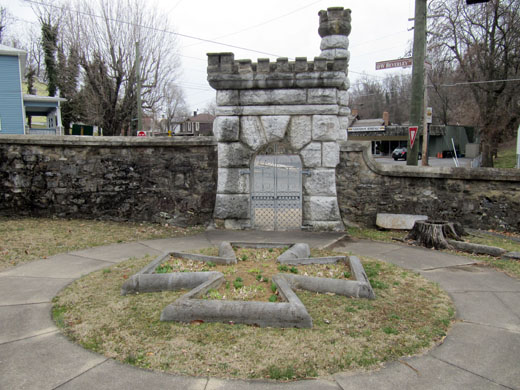 Collins also designed the lovely Effinger family mausoleum, which looks like a stone drawer pulled from the facade of a Gothic cathedral. 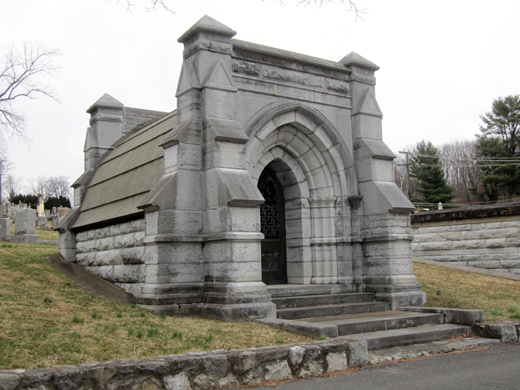 One of the weirder corners of Thornrose leads to a monument to the Confederate dead. There’s good reason to associate faux-medieval castle ramparts with Southern chivalry, but look: 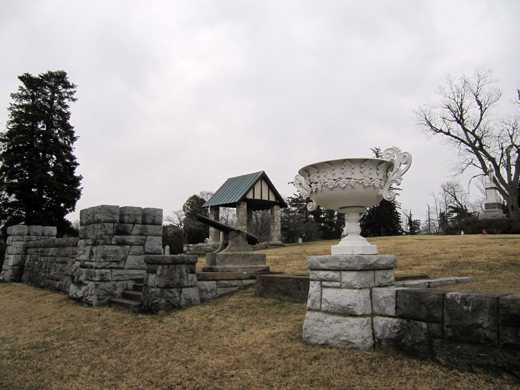 Like Staunton itself, Thornrose grows ever more eclectic. Its wind-worn headstones aren’t lurid or sad; there’s a matter-of-factness here that harks back to The Two Noble Kinsmen:

This world’s a Citty full of straying Streets,
And Death’s the market place, where each one meetes.

A few blocks away, on a gloomy Sunday morning, you might spot the fellows who play Chaucer’s knights leaning into freezing rain and muttering lines that have only been heard from a handful of actors in 400 years. Later, on stage, they’ll offer up a fine reminder for the week before Easter: not everything that dies is gone for good.