And so February ends with a work-weary sigh. Thanks for checking in! If life doesn’t continue to intervene, expect posts in March about barbarian poets, the medievalism of World War II—and, of course, a few more gargoyles.

Until then, find ye here some spiffy links.

If you love Njal’s Saga, why not take a scholarly tour of saga country on horseback?

If you haven’t yet read the first part of Adam Golaski’s funky new translation of “Sir Gawain,” what are you waiting for?

E-book publishing for medievalists might get easier with the debut of Witan Publishing.

Book Haven thinks about, like, the culture of vagueness and stuff.

Kevin at Interpolations reads a famous Whitman line in context.

Welcome to the Web, Washington Independent Review of Books.

Is Washington “death city” for one novelist?

Historians writing for non-scholars will dig the new Electrum Magazine.

Chris at Hats & Rabbits wins me over by explaining, mirable visu, why he doesn’t blog about the news.

Flavia contemplates grief, mourning, and the elusiveness of “closure.”

The Silver Key kicks around nihilism in fantasy.

Some messengers are ambivalent about their own calling. This one perches 175 feet up, high above the birdwatcher, just below Medusa, and weirdly close to angels.

Rilke from his rampart: Beauty’s naught
But terror’s dawn. Then why do mirk-mites wrought
From strofe and stub, Creation’s afterthought,
Squat seraph-like on spits above the earth:
To herald terror’s end, or stress the birth

Of idle envoys? Will my gaze reverse
The pattern, roughly swat the form aright,
Or only skew the catachresis worse
For pious poets? Dismal in whose sight
We loom in low, like pests, and while you write
Like angels on a book-shelf in Berlin

We stand and wait for nothing to begin. 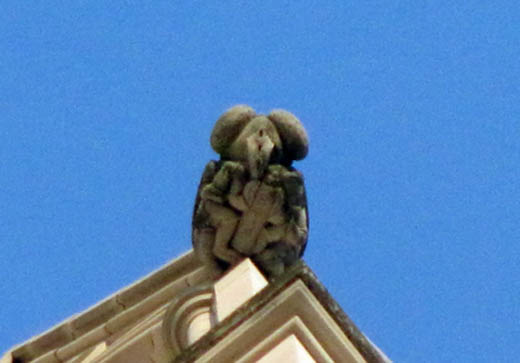 “You ask if I love you,” Charlemagne famously wrote to Queen Fastrada from the Avar front. “What can I say? You know that I do, and that this is just one of those games that we play.” The occasion for that letter was Valentimes, a little-known Frankish observance held on February 13 to honor a Roman citizen whose martyrdom in the jaws of a vicious bear was, historians now believe, a case of mistaken identity. Although little is known about Valentime, the Vatican recently named him the patron saint of supermodels and the illiterate, and the memory of his martyrdom lingers in a centuries-old custom by which undemonstrative men send costumed toy bears to their lovers as tokens of affection.

Those of us who harbor a passion for historical accuracy will observe Valentimes Day with ursine solemnity. However, because the spirit of Valentime demands that we tolerate misguided readers who venerate saints of far more dubious provenance, we offer this bouquet of music videos about love and romance to get you through a highly emotional Monday.

The great Louis Jordan loved Caldonia in spite of himself.

Neil Finn could have told him: she will have her way.

Boleslaus II may have fought for his people’s independence, but in the 1970s we recognized only one macaronic Polish prince: Moja droga, jacie kocham…

Roger Miller at his best: “Leavin’s Not the Only Way to Go.”

The year was 1985, and Kid Creole couldn’t answer a simple question: “Why can’t you be like Endicott?”

To my knowledge, there’s only country-western song about the effect of faster-than-light space travel on a long-distance relationship: “Benson, Arizona.”

What do you get when you filter an English nursery rhyme, the inexpressibility topos, and mid-1980s progressive rock through the liver of a disheveled Scotsman? “Lavender.”

Got halitosis before that big Valentimes date? Take a handful of Mighty Lemon Drops.

Guys, today isn’t the day to drunk-dial the girl you lost to cocaine.

John Waite, of all people, gives us a heartfelt cover of “Girl From the North Country.”

I didn’t think much of the Sting song “Fields of Gold.” Then I heard the late Eva Cassidy perform it.

“You say I’m a dreamer; we’re two of a kind,” Charlemagne’s adviser Angilbert wrote to the king’s daughter Berta in A.D. 798, “both of us searching for some perfect world we know we’ll never find.” Angilbert and Berta went on to have children together, and Angilbert’s education ensured his prominence an abbot, administrator, ambassador, and poet in an otherwise imperfect world. Were Angilbert alive today, he’d likely endorse these interesting links.

Dame Nora wraps up “quince week” with some quince history, thoughts on quince marmalade, and a recipe. She also invents her own haggisy sausage.

The Cloisters blog nibbles on real plants in the unicorn tapestries.

Gabriele makes sense of the development of Roman helmets.

A philosopher-in-training meets an owl.

The Book Haven considers the kitchification of Vietnam and Joseph Brodsky and Egypt.

Debate time! James Gurney (whom I like) versus Frank Gehry (whom I don’t).

Why not buy recordings of Old English poems? (I have ’em; they’re good.)

Leslie gives advice to the MFA-curious.

The “100 Reasons NOT to Go to Graduate School” blog serves up reason #43: changing attitudes.

Pete notes the dearth of fiction about finance.