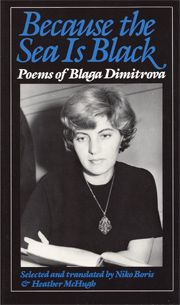 I’m not a book collector, but I am a book accumulator, so I haunt the D.C. area’s secondhand shops in joyful hope of discovering something peculiar and new. Other blogs charmingly document the personal detritus we slough off in our books, but I never find anything to get the Antiques Roadshow crowd all aflutter. Sometimes, I find something better.

While rummaging around the Second Story Books Warehouse recently, I spotted Because the Sea is Black, a 1989 collection of translated poems by Blaga Dimitrova, a Bulgarian anti-communist writer who served as her country’s vice president in the early 1990s. I’d never heard of Dimitrova, but I was happy to meet a new poet for the price of a $7.50 paperback. I was also intrigued by a translator’s note reminding Americans that “writers who live where not everything can be said with impunity develop strategies for expressing concerns that are mortal.”

As with many modern translations, this one doesn’t make clear the poems’ original forms. Dimitrova’s poetry is rendered in semi-free verse intermingled with wordplay and rhyme—although sharp, rhythmic, fun-to-recite passages like this one encouraged me to read on:

Memory, what does it mean
to be clear? To be ice? To be twice? To be more?
We are gasping with asking since infancy, answerless—
What is the name of the cure?

The big surprise, though, was the half-title page, where I found an inscription:

With thanks
for your report,
that it mooved [sic]
me deeply —
Bl. Dimitrova

“Mr. Boorstin” is prolific historian Daniel J. Boorstin, author of The Discoverers and The Creators and Librarian of Congress from 1975 to 1987. What were he and Dimitrova doing in Jerusalem? An L.A. Times story tells me that they were tasked with kicking around the dreary question of writers as “moral guardians”:

The invitation to be “the conscience of the world” may have seemed like one any writer would accept. Here was a chance to denounce “ethnic cleansing” in the Balkans, starvation in Somalia, anti-Semitism in Europe, racism in America.

But one after another, 16 leading novelists, poets, historians, biographers, essayists and publishers declined the invitation during the Jerusalem International Book Fair this week. At a two-day forum co-sponsored by the fair and the Aspen Institute, many also warned of the danger of any writer acting as a moral arbiter.

“Why is a writer more capable of being a conscience than a jurist or an educator or a philosopher?” asked David Grossman, an Israeli whose books have explored the difficult relationship his country has with Palestinian Arabs and examined the moral dilemmas that result. “No one can serve as someone else’s conscience.”

Cynthia Ozick, an American novelist, poet and literary critic, spoke even more sharply: “Being a writer myself, I know what kind of people we are—and I don’t trust us. Writers are after power, and when writers meddle in politics it can be a cover for their drive for power.”

The L.A. Times article doesn’t report what Boorstin said that left Dimitrova “deeply moved,” but it does provide a snippet of her musings:

The forum concluded that conscience was necessary to inform a writer’s work, wrong as a role for the writer in society, yet in some ways inevitable as they faulted others who would perform the same function.

“A politician and a writer speak with two different languages,” Dimitrova observed, “and it is very dangerous when they get mixed together but we all do this.”

Twenty years on, I don’t know that poets, journalists, novelists, and critics are still this hesitant to declare themselves our consciences.

Dimitrova died in 2003. Boorstin died in D.C. in 2004, and based on the number of signed books I’ve found, I’m thinking the less valuable bits of his poetry library ended up at Second Story. (Sic transit gloria mundi: The remnants of Jack Kemp’s personal library also clutter the bookshelves just three aisles away.)

I don’t suppose we’ll ever know if Boorstin and Dimitrova genuinely liked each other, or if Dimitrova’s inscription represents anything but professional courtesy, but discovering it amid half a million moldering books makes clear how writers—and the words they labor to perfect—slip so readily into oblivion.

That’s reason for reflection, not despair. It’s a worthier challenge to roam the stacks, using this one slim relic of Blaga Dimitrova to find in endless spines not squandered lives, but infinite creation:

Breathing, we go blind
to what exists—whole universes!—
right here, next to us. 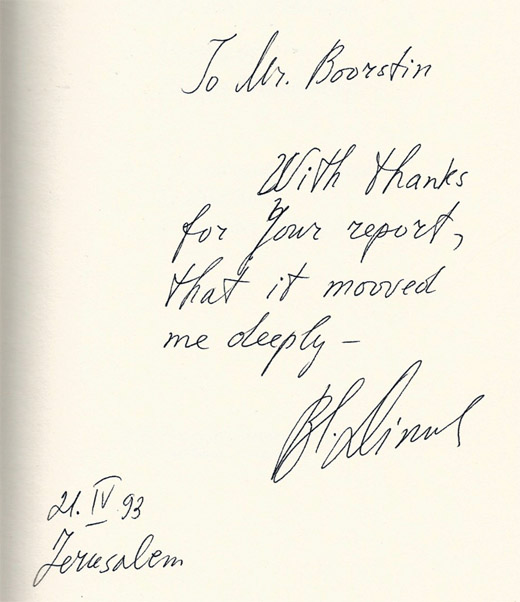