Regular readers of this blog may recall that part of the Bishop’s Garden is devoted to Walafrid Strabo, the Carolingian abbot and teacher best known today for De Cultura Hortorum, a poem about his garden at Reichenau. Walafrid was only in his early thirties when he drowned in 849 while trying to cross the Loire. This goat, apparently a medievalist, looks out over the garden and remembers him yet.

As frozen fingers blunt the thorn,
So Walafrid was barb’rous born

But to that noble island brought.
There Walafrid a vision wrought

With falt’ring eye, but steady feet;
Yet Walafrid would fast retreat

To fertile slopes that front the east.
To Walafrid, to tend the least

Of bitter twigs was sweetest toil,
So Walafrid provoked the soil

To summon worms, and banish moles.
Ere Walafrid the care of souls

Attended, first he fathered roots;
So Walafrid, when bade by brutes

To court, would wall his fruitful mind.
There Walafrid was wont to find

Of maidens’ woolspun, wound like gourds;
And Walafrid, when fraught by swords

That striplings choke the root, like sage;
And Walafrid foresaw how rage

In bitter plots like wormwood grows;
Then Walafrid perceived in rows

Of scrabbled verse the reek of rue,
Which Walafrid perused, and knew

A soul his faith and friendship scorned.
Then Walafrid in silence mourned

Their idyll dawns, with leaf-light strewn;
But Walafrid prayed God the moon

Shone ghostly, sometime, on his face.
Lest Walafrid despair of grace,

He starved the flame, like seeds to drought;
And Walafrid dreamed long about

The flood, the torrent, murm’ring death;
Then Walafrid would gasp for breath…

Now wait, and watch the snow-bed yield
To branch and bramble unconcealed

That ache for thirst, but must bow down
To seed that drinks, but does not drown

As sprigs and spindrels long unseen
Entwine the font, and blinding green

Where column-bright, the lily grows
And raises morning o’er the rose

That marks the day when winter dies;
Then Walafrid, refreshed, will rise. 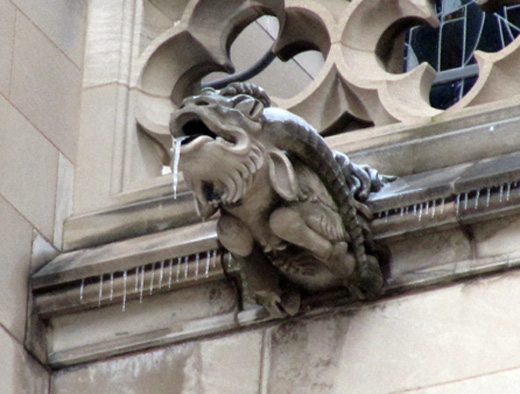 The southwest tower is haunted by a skeletal horse. Few people see it, but at sunset, you might hear it sing.

As I was riding to Banbury Cross,
Lazily lilting of lovers in loss,
Out swept a seeress who sneered down her nose:
“He shall have music wherever he goes.”

As I was riding to Banbury Square,
Twined in a tribute to tumbledown hair,
Out skipped a maid: “Are you singing for me?”
Studied and sober, I stared at the sea.

As I went riding to Banbury Street,
Rhyming a romance with riddles replete,
Out slouched a spinster: “Perchance it’s my day?”
Crabbed and confounded, I cursed the delay.

As I was riding to Banbury Lane,
Poignantly piping of passion and pain,
Out shuffed a widow: “Can you see his face?”
Piqued and impatient, I parted apace.

As I went riding to Banbury Road,
Wide by the wayside that wisdom bestowed,
Out rose a hymn: Every rapturous word
Rang through the alleyway. Nobody heard. 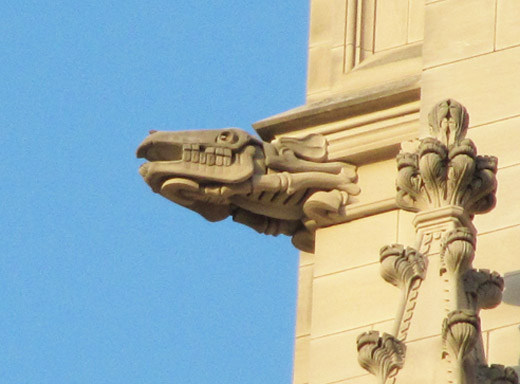 A couple years ago, I thought I’d closed the book on Charlemagne, but current events will forever conspire to take me back to dear old Francia—like this story from today’s New York Times:

Times Square had the ball drop, and Brasstown, N.C., had its descending possum. But no place had a New Year’s Eve as unusual — and downright disturbing — as Beebe, Ark.

About 10 p.m. Friday, thousands of red-winged blackbirds began falling out of the sky over this town about 35 miles northeast of Little Rock. They landed on roofs, roads, front lawns and backyards, turning the ground nearly black and scaring anyone who happened to be outside.

“One of them almost hit my best friend in the head,” said Christy Stephens, who was standing outside among the smoking crowd at a New Year’s Eve party. “We went inside after that.”

Noting that there’s nothing new under the Arkansas sun, Scott Nokes at Unlocked Wordhoard points out that the Anglo-Saxon Chronicle mentions a massive avian death-fest in A.D. 671. He’s right—but let’s also not forget Theodulf of Orleans and his very odd poem, “The Battle of the Birds.”

Readers of this blog know Theodulf as a witty poet who served as bishop of Orleans during the reign of Charlemagne. In his later years, the old Goth was implicated in a plot against Louis the Pious, and he spent his exile pleading his innocence and composing a lengthy poetic epistle to Moduin, bishop of Autun. In what appears to be a murky personal and political allegory (Dümmler, MGH Poetae I, 563-569), Theodulf dwells first on a weird story about a dry river and then spins two yarns about flocks of birds that clash like ancient armies.

In verse rich with allusions to classical warfare, Theodulf describes the birds dispatching envoys back and forth and then rushing to slaughter each other like Romans and Phoenicians. Here’s what Theodulf claims an eyewitness, Gerard, told his informant, Pascasius, about the aftermath:

(Here’s my own quick translation)

As autumn acorns drop from oaken branch
And old leaves yield before the coming frost,
In no contrary way that troop of birds
Did fall, and such great slaughter filled the earth.
Like summer grain on polished threshing floors,
The battlefield was strewn with slaughtered birds.
A few that flew from north were northward turned;
On either side, a cohort lay, all dead.

The word went out. The folk drew round, amazed,
And marveled where lay limbs of different birds;
The bishop of Toulouse came from the town.
“Are wingéd omens edible?” they asked.
“Leave what’s proscribed, take what’s allowed,” said he.
Their wagons packed with birds, they headed home.

There’s no evidence that Theodulf’s third-hand anecdote was based in reality, nor is it the source for the pseudo-Charlemagnian quip, “Let my armies be the rocks and the trees and the birds in the sky.” Alas, in this case, medieval precedent isn’t very instructive. My only hope is that the good people of Beebe, Arkansas, will seek advice from someone other than their local bishop when they ponder the edibility of creatures that plummet en masse from the sky.

Someone recently asked me if I thought gargoyles get bored. Spend a morning with the three-headed dog on the south transept, and then you tell me.

A martyr
sees saints circumambulate smarter
while legates who pult at the wall
fall.

A yeoman
scabs each sanguinarial omen
while canons for ungilded stone
moan.

A maiden
with sopp’d weialálas is laden
while posers who fish for the ring
sing.

A traitor
spins Fortune against her creator
while cold consolation reveals
wheels.

A hero
rounds duodenáry to zero
while Argonauts freighted to fail
sail.

A portal
makes polycephálics immortal
while rhymers who rage in the dark
bark.

[This post originally ran two years ago, but repeating it feels like a fine way to welcome 2011.]

From time to time, I dig through the poetry of Theodulf, ninth-century bishop of Orleans, looking for nuggets to translate. Theodulf was a wit, so I’ve had fun making modern English versions of his Latin verses about pilgrimages, libations, wildlife, stolen horses, and children’s dreams. But what, I wondered, could Theodulf do for me on New Year’s Day?

I shouldn’t have worried; the old Goth didn’t let me down. In the middle of a dull poem about faith, hope, and charity (Dümmler, MGH Poetae I, 466-467), I found four lovely lines of Latin, and I plucked ’em:

With the reckless optimism of a Leyendecker baby, I give you this translation:

To see the blessed gift of hope, behold
The egg that keeps a secret in its shell:
The present, hiding hope, conceals it well;
The future cracks it: tiny wings unfold.

Those of you who read Latin are shaking your heads at this rather free rendering. So be it! It’s a new year! Old habits limp to their graves, ashamed! Besides, I did some research and found that these four lines have been translated repeatedly throughout the centuries, often by poets who took far greater liberties than I did.

For example, here’s a little-known translation by Langston Hughes:

THEODULF AT THE 125th ST. DINER

The sunny side
An egg supplied
Upon t’morrow gambled.
It hides in a shell
That poached it well
And never got it scrambled.
The present keeps our dreams deferred.
The future hatches: out pops a bird.

And here—dear reader, I was as astonished to discover it as you surely are—is a translation of Theodulf by none other than T.S. Eliot:

The sea-birds race inland from the storm
Above the subtile chicken seeking quiet in the barn
Where she dares not hope
—“Lasciate ogne speranza, voi ch’intrate“—
But for the egg:
The shell conceals our tatterdemalion past—
The shell incubates our necessitous future
—and hope becomes a farmer
With shards of egg in his desquamative palm
Forgetting the recrudescent monotony of the plow, straining
To hear the eager peeping in the straw.

My translation isn’t looking quite so loose now, is it?

On behalf of Theodulf, T.S. Eliot, Langston Hughes, and a room full of imaginary chickens, I wish you a happy and recklessly hopeful new year.