Do you ever feel like a crepuscular critter in a diurnal world? I do, because I am, but sleeplessness hath its benefits: while most of Washington is lost in slumber, I can go outside, walk ’round the corner, and catch a rare glimpse of our neighborhood fox.

Foxes are uncommon in the middle of cities, but this one appears to be prospering; he’s getting so big that he’s easy to mistake for a coyote. I worry, though, because he’s been spotted darting across our busy intersection at night. The life of a fox is, alas, precarious. How long can his good fortune hold out? I pose this question as a flimsy pretext for reproducing this wonderful medieval image of foxes on the Wheel of Fortune. 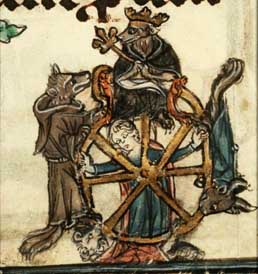 For more about this illustration (which comes from a medieval psalter) and to learn more about the foxes of story and song, check out Carl’s latest post at Got Medieval (whence swiped I yonder image) or hark back to his April post, which he illustrates with a medieval fox behaving rather lewdly. Both posts will introduce you to Reynard, the ultimate bad-boy of medieval animal stories and a varmint who always seems to be at the top of Fortune’s wheel.

If you’re more keen on seeing a fox get busted—perhaps you’ve lost a chicken to the jaws of le renard?—enjoy a little “Quid Plura?” flashback and read a poem by Theodulf of Orleans about an incident at the monastery of Charroux. Fortune’s wheel is always whirling, even for a fox in dapper clothing.

While I’m going on about foxes, here’s Nickel Creek’s rendition of the folk song “The Fox,” and here are several video variations on a modernized medieval beast fable: the “Oo-De-Lally” scene from Disney’s Robin Hood in English, German, Swedish, Russian, French, Catalan, Hebrew, and Arabic. Let it not be said that we’re not multicultural on this site—or that we can’t find ways to string together a variety of trifles to give you something, however flimsy, to browse on a humid June morning.