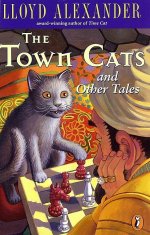 Lloyd Alexander got tremendous mileage out of felines. Between 1956 and 1973, four of his books—My Five Tigers, Park Avenue Vet, Time Cat, and The Cat Who Wished to Be a Man—were testaments to his adult-onset affection for the common house cat. Published in 1977, The Town Cats and Other Tales is a fitting coda to Alexander’s decades of cat-fancying, offering eight concise stories about cats and the foolish humans who are better off for having known them.

The logic of the tales in The Town Cats is unusual but internally consistent. All of the cats talk, and most of them easily assume human roles or trade places with people, largely for comic effect. Most amusing to an adult reader is Alexander’s gentle but persistently disdainful depictions of people who govern: a bureaucrat who threatens to impose taxes and conscription on a provincial town; a king who makes his personal preferences the law of the land; a sultan who forbids anyone to tell him “no”; and a group of city fathers who argue about which of their names will adorn public works. Naturally, cats humble them all. At the same time, the cats in these stories help the poor, reward the honest, and teach hard lessons to the nouveau riche.

Published during the period between the Prydain series and the Westmark books, The Town Cats offers nothing new for Lloyd Alexander readers, but that’s the judgment of an adult sensibility—or, more specifically, of an adult who’s familiar with Alexander’s later, more mature writing. Although the final chapter, the story of a cat trying to choose a career path, is unsubtle and kind of corny, most of the tales in The Town Cats are clever fables set in fantasy versions of recognizable places, from 17th-century Holland to the bustling cities of the Middle East. For kids, the book promises a world tour and a fine introduction to the art of the short story. For adults—well, all I can say is that if you take no pleasure in watching a talking cat outwit a cheating sultan at chess, you surely have a heart of stone.