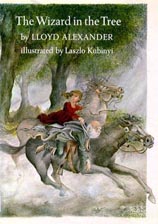 When Mallory, an orphaned scullery maid with a head full of fairy tales, finds a grouchy wizard named Arbican trapped beneath the roots of a dead tree, her life is transformed. Arbican belongs to an earlier age; he literally missed the boat when his fellow immortals sailed away and took the world’s enchantments with them. As the wizard struggles to revive his dormant magic, Mallory has a problem of her own: a local tyrant is plotting to destroy her village—unless Arbican can be convinced to work an enchantment or two.

Summarized so conventionally, The Wizard in the Tree is as derivative as anything a fantasy publisher might toss in the “maybe” pile, even if the actual book behind that premise is a curious departure for its author. Largely bereft of Alexander’s characteristic humor, the novel is notable for its relentless grouchiness—and for Alexander’s gamble that his young-adult readers will be patient with a story that wanders well beyond their usual interests.

Despite the promise of magic in its title, The Wizard in the Tree is really a novel about politics and money. Scrupnor, the village squire and Alexander’s stock provincial bully, wants to raze the village to make way for a highway lined with coal mines. Greedy and murderous, Scrupnor monopolizes local industry through restrictive contracts with avaricious and gullible locals, an arrangement that prompts one of them, an innkeeper, to deliver a wistful monologue about his desire to buy cheaper victuals outside the village borders. State monopolies, restrictive contracts, and rapacious development aren’t mainstays of middle-grade fantasy, but Alexander’s determination to tell this story seems strangely personal, as if the author hopes to embarrass a real-life politician who once got on his bad side. Lloyd Alexander characters typically regret any loss of life, but here the demise of Scrupnor is met with only resignation from Mallory or Arbican—despite the villain’s gruesome incineration.

Just as Alexander skimps on humor, he also avoids sentimentality: Mallory and Arbican never become friends, and the ancient wizard departs the novel as pompous and unlikeable as he enters it. Arbican spends most of the book lambasting the ineffectiveness of magic in human affairs and decrying humans who take fairy tales literally, but his ranting serves a purpose: When Mallory discovers that oft-roasted fantasy chestnut, the magic within herself, it turns out to be nothing more wondrous than her ability to find courage when confronted by scoundrels and fools. As a result, The Wizard in the Tree stays true to itself, becoming something far more magical and rare: an anti-fantasy.

Alexander’s message is simple: magic happens when you understand, as Arbican does, that a fairy tale needs to be a metaphor, not just a Christmas tree festooned with empty genre tropes. A gruff wizard and a daydreaming scullery maid are only worth a reader’s time when an author uses them in a story that’s actually about something—in this case, fighting corruption through bravery and basic human decency.

As early as 1974, Alexander saw how cloying and derivative his genre of choice could become; The Wizard in the Tree was his response. Aspiring fantasy writers, take note: you shouldn’t copy Lloyd Alexander, but you would be very wise to read him.