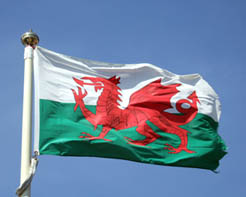 Every few years, I’m asked to teach Arthurian literature, a gig that’s led to a curious custom here at “Quid Plura?” headquarters: In the week before we talk about The Mabinogion, I fly the Welsh flag above my television. When the week is over, the flag gets folded and stowed, but not before I’ve caught up on several years of Welsh news, reread the relevant scholarship, and startled myself daily with the sight of a huge red dragon by the bathroom door.

What more can I say? Y Ddraig Goch ddyry gychwyn! Let the red dragon show the way to this dubious assortment of Welsh-themed links.

Watch the first part of an eight-part BBC documentary about Owain Glendywr.

Need a fix of Welsh? Listen to BBC Cymru, partake of their “Learn Welsh” Web site, or dabble in the language with the Cardiff School of Computer Science.

The Digital Medievalist has a FAQ on learning Middle Welsh.

Last year, locals officials made a wonderful mistake on a Welsh-language road sign.

If you ever need accommodations in Snowdonia, pop over to the Plas Gwyn Guest House. The proprietor cooks a fine breakfast and stocks a nice library of maps for the overzealous hiker.

While you’re there, gawk from the highway at Dinas Emrys, where Vortigern supposedly tried to build his tower on the shakiest of foundations.

If you want to follow in Patrick McGoohan’s footsteps and be chased by a giant inflatable white ball creature thingie, Plas Gwyn isn’t far from Portmeirion.

To my knowledge, there’s only one song about a wheelchair-bound savant who takes a break from starting World War III on his cell phone to wax nostalgic about his Welsh upbringing. Here it is.