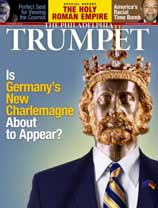 I’m not a regular (or even occasional) reader of The Philadelphia Trumpet, the magazine that “seeks to show how current events are fulfilling the biblically prophesied description of the prevailing state of affairs just before the Second Coming of Jesus Christ,” but this cover (brought to my attention by the Great One) impressed me. Good ol’ Karl has a pretty keen eye: His tie matches his suit and the gilded details on his otherwise silver face.

I’ve never tried to picture Charlemagne in a business suit—I’ve never gotten beyond imagining that he looked like a taller, brawnier, less bald version of Dennis Franz—but if modern Christian eschatology intrigues you, then go see what The Philadelphia Trumpet has to say about the forthcoming German elections, because “Germany is about to start World War III—according to your Bible.” The apocalyptic Charlemagne is hardly a new incarnation, but it’s remarkable that such a burly medieval king can still slip so deftly into sharp modern clothes.

UPDATE: Matt Gabriele, who knows tons about Charlemagne and eschatology, has a go at the details of this latter-day prophecy.