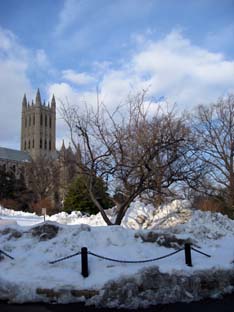 Despite the presence of noble-minded buffoons sitting around tables making futile plans, Washington is not an Arthurian town. Sure, there’s that suburb with corny Arthurian names, but Washington culture may be better suited for mocking fabliaux than the charming fictions of medieval romance.

Still, this city never stops sprouting quasi-medieval surprises. Trudge through the snow three days after a blizzard, and you do so alone; no one’s out taking pictures anymore, not even at the perpetually lovely Bishop’s Garden. Climb over a wall or two, send a few squirrels bounding away from the racket you make, and you’ll stumble onto this, in the driveway of a neighborhood school: a tree which the gardening guild claims was grown from the Glastonbury Thorn.

Of course, the “real” Glastonbury Thorn, dubiously rooted in history, has died several times over the centuries, and there’s reason to believe that my neighbors occasionally replace the local offshoot. Interest in the Washington thorn peaked in the 1950s, which partly explains why I’ve spent many a summer afternoon dozing on the Bishop’s Lawn unaware that this trace of Arthuriana prospered a few yards away, the quiet center of its own Tennysonian scene:

“The cup, the cup itself, from which our Lord
Drank at the last sad supper with his own.
This, from the blessed land of Aromat–
After the day of darkness, when the dead
Went wandering o’er Moriah–the good saint
Arimathaean Joseph, journeying brought
To Glastonbury, where the winter thorn
Blossoms at Christmas, mindful of our Lord.
And there awhile it bode; and if a man
Could touch or see it, he was healed at once,
By faith, of all his ills. But then the times
Grew to such evil that the holy cup
Was caught away to Heaven, and disappeared.”

It’s a silly thing, really, but after a week of Washingtonians grousing about winter, I’ll be glad when they’re back to chasing political grails. In a city that imports its legends, we could do worse than remember stories that teasingly promise perpetual spring.