Sure, the average American associates this week with football, tryptophan, and noncommital nodding during awkward conversations about politics, but here at “QP?” headquarters, Thanksgiving means only one thing: experimental recreations of carrot jam from the medieval Islamic world.

Carrot jam? Yes, carrot jam. Known in Arabic as jawārish, the dish appears in a cookbook called The Treasure of Useful Advice for the Composition of a Varied Table, probably compiled in Egypt or Syria in the 13th century. The recipe is translated in Medieval Cuisine of the Islamic World by Lilia Zaouali, and while Islamic cookbooks are just as blithe as European cookbooks about assuming expertise on the part of the reader, this one seemed like a no-brainer. After all, sweet carrot dishes are common today, and carrot preserves and marmalade aren’t terrible exotic—so again we endeavor to answer, probably in vain: What did the past taste like?

First, our ingredients: cookbook, carrots, honey from a friend’s New Jersey apiary (plus two plastic-bear backups), various spices, and a can of Chef Boyardee Ravioli that had nothing to do with this recipe but whined about being left out of a group photo. 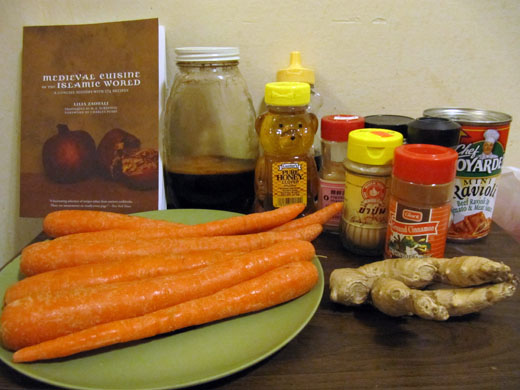 It is necessary to select fresh, red carrots, to wash them, clean them, and cut them as thinly as possible. Put them in a ceramic pot, add a little bit of honey, and cover them with water.

Lacking red carrots, I had to go with plain old orange. Here they are, simmering in the Le Creuset like flunkies in Charlemagne’s bath house.

Cook them until they are soft, then strain off the water with a sieve and add a quantity of skimmed honey equal to that of the carrots.

An hour later, a pound of carrots yielded around a cup and a half of carrot glop, to which I added one cup of honey. Rather than bore you with lame photos, let’s hail the return, by popular demand, of the Trapper Keeper Unicorn of Applied Paleobromatology.

Distracted by the hard work of mushifying a few carrot chunks with the aid of Sir Braun de Hand-Mixer, I failed to witness a shocking crime on the countertop behind me. 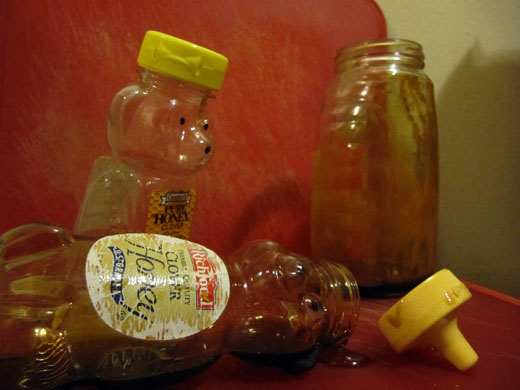 Did you know that the tradition of selling honey in bear-shaped containers derives from the Abbasid practice of importing actual bears from Europe, squeezing them while upside down, and seasoning food with whatever spurted from their skulls? The caliphs really were that wealthy.

The recipe calls for spices:

Fresh out of spikenard, and stunned by the recipe’s endorsement of a freeform jazz odyssey of spices, I opted for four I knew I had in my cabinet: 1/4 teaspoon each of pepper, ginger, cardamom, and cinnamon. (I’m not positive that “pepper” in a medieval Middle Eastern recipe meant “ground black peppercorn,” but so be it.) 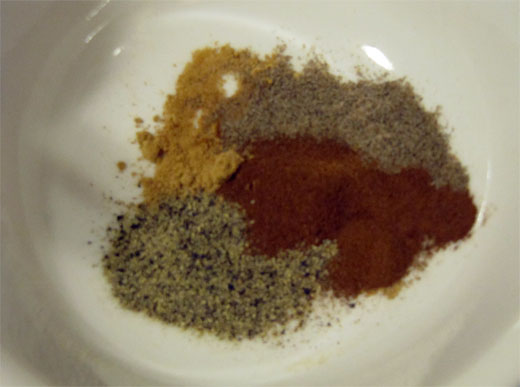 I mixed up this little masala, dropped it into the honey-and-carrot mush, and did as I was told:

Cook to thicken the carrot jam.

Two teaspoons of spices turned out to be too strong for fewer that two cups of carrot jam, but holy hopping Barmakids, hot jawārish a la Sypeck is tasty.

Medieval Islamic royalty had a sweet tooth to rival modern America’s, as I found when I whipped up a batch of tabaahaja, the wince-inducing candied lamb of the Abbasids, but carrot jam just isn’t that strange. Scale back the spices and you could probably convince Thanksgiving guests that you’re feeding them Aunt Harriet’s sweet potato mash, albeit with a throat-catching kick. (I suspect a version with spikenard, cubeb, and galangal might land harder on the Western palate.)

One question lingers: In the medieval Islamic world, was “jam” eaten hot? Zaouali’s book doesn’t say. The jawārish recipe includes only one more line: “Pour it into a glass jar and consume as needed.” Which is what I did.

You know what? Cold jawārish smeared on toasted naan isn’t bad either. The pepper and coriander give the jam a kick we more commonly expect from heated food, but that’s because of the spices and quantities I chose. Medieval Islamic cooks were free to make this stuff with whatever spices they wanted, as are modern paleobromatologists.

Of course, I can’t help but pine for the ideal jawārish chaser: a cold, fizzy glass of galangal soda.