If you’ve barreled through Georgia on I-95, you may have noticed a strange sight on the east side of the highway: a B-47 Stratojet bomber in front of what appears to be a medieval English church. Rejected cover art for A Canticle for Liebowitz?

Not hardly. You’re catching a glimpse of the Mighty Eighth Air Force Museum. The 8th Air Force was activated in Savannah in 1942 before being sent to England to join the RAF in bombing runs over Germany. The museum, just outside Savannah in Pooler, tells the Mighty 8th’s story in the context of the air war in Europe.

Inside, thoughtful and thorough exhibitions give you a harrowing sense of what life as a bomber crewman was like, especially when you turn a corner and behold a B-17 being painstakingly restored by volunteers.

On the grounds, countless plaques and monuments are sobering reminders of the dead. Among them stands an unlikely medievalist sight. 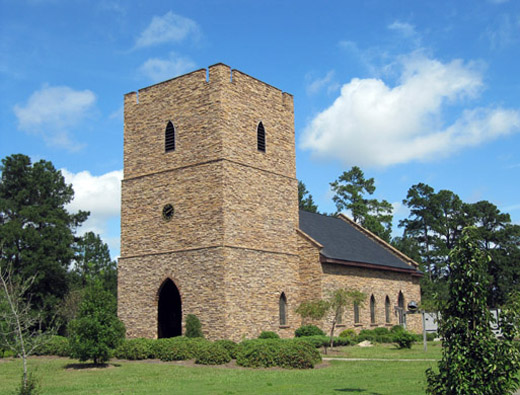 The American vogue for neo-medieval churches faded in the early 20th century, so I was surprised (and delighted) by how recently the Chapel of the Fallen Eagles was dedicated: May 2002. According to the firm that built it, the chapel is based on no one church but generally evokes medieval English styles:

The design for the non-denominational chapel is based on English parish church architecture, which generally developed between the fifth and sixteenth centuries. The design reflects both the traditional site orientation and building elements consisting of a west facing tower, central nave, and east facing chancel. The stonework and interior finishes are typical of country churches as they evolved through the centuries.

I’d like to imagine that Gothic window tracery left a vivid impression on the men of the 8th Air Force, but the chapel’s stained-glass tribute to All Saints Church in the Cambridgeshire village of Conington hints at more pressing concerns.

According to a Conington-area historical society, “a red light was installed on one of the pinnacles of the Church tower to help guide the planes back from their missions during World War II.” Appropriately, the village sign at Conington shows the church tower beneath the silhouette of a B-17.

After all these years of chasing down medievalism in America, I shouldn’t have been surprised to find a pseudo-medieval chapel on a Georgia interstate—but I was. Yes, medievalism is everywhere, but the Chapel of the Fallen Eagles represents a use for it we don’t often see. Unlike many of their countrymen, the vets of the 8th Air Force weren’t dreaming of castles and chivalric frills. Instead, they imagined, and sanctioned in stone, a monument to Anglo-American friendship.

5 thoughts on ““When I was their age, all the lights went out…””