“How solemn and thrilling the scene as we anchored at night at the foot of those mountains, clothed with overhanging forests; and every thing grew dark and mysterious…”

So wrote an awed teenaged Manhattanite in 1800 about his first voyage up the Hudson River. If you ever find yourself in Tarrytown, New York, and if you can find (as I did this morning) a brief break in your business there, stroll down the street and visit Sunnyside, the late-life home of the wide-eyed mythologist who likened the Hudson to the Rhine: Washington Irving, one of America’s great unacknowledged medievalists.

It’s fitting to poke around Sunnyside on Columbus Day. Biographer Andrew Burstein notes that Irving’s A History of the Life and Voyages of Columbus went through 175 editions between 1828 and 1900, and that “[a]ccording to a recent survey of the contents of American libraries, rural and urban alike, in the mid-nineteenth century, Irving’s Columbus was the most commonly owned book. It undeniably influenced how American schoolchildren were taught their country’s origins for the balance of the nineteenth century.” As Nancy Marie Brown recently mentioned, Irving’s book almost certainly popularized the misperception that medieval people believed the world was flat.

Washington Irving loved the Middle Ages. In 1804, at 21, he admired Gothic architecture in France, and he was apparently so enamored of St. Agatha’s Cathedral in Sicily that while he gaped at the place, someone picked his pocket. He later included references to Charlemagne in his satirical “Knickerbocker History” of New York City, and he also whipped up a scene where one of his Dutch forefathers, Oloffe, has a medieval-style dream vision of Saint Nicholas, the city’s patron.

Irving’s Sketch-Book (most famous today for the German-inspired “Rip Van Winkle” and “The Legend of Sleepy Hollow”) also features a dream vision in which Irving’s alter ego, Geoffrey Crayon, visits the library at Westminster Abbey, where medieval books literally speak to him. Irving’s 1821 novel Bracebridge Hall, with its character sketches of squires, old yeomen, and romantic lovers, teems with a love of medieval tradition and even includes a chivalric digression: “The Student of Salamanca.” Irving also adored medieval Spain, romanticizing history and legend in Tales of the Alhambra and Chronicle of the Conquest of Granada.

I don’t think it’s unreasonable to call Washington Irving one of America’s first pop-medievalists—although interestingly, he didn’t use the word “medieval.”

In “Medievalism: Its Linguistic History in Nineteenth Century Britain,” Clare A. Simmons notes that Washington Irving avoided the term “Middle Ages,” probably because it was then associated with Roman Catholicism—but the word “medieval” never leaks from Irving’s pen either. Instead, he opts for phrases like “olden times,” “days of yore,” and “the age of chivalry.” The word “medieval” was in currency in England at least as early as 1827, but if Irving heard it during his extensive time abroad, he doesn’t seem to have brought it home with him.

Irving bought and moved to Sunnyside in 1835. Around that time, he abandoned medieval subjects and wrote books about America: A Tour of the Prairies; the Western novel Astoria; the romance The Adventures of Captain Bonneville; and a five-volume biography of George Washington. 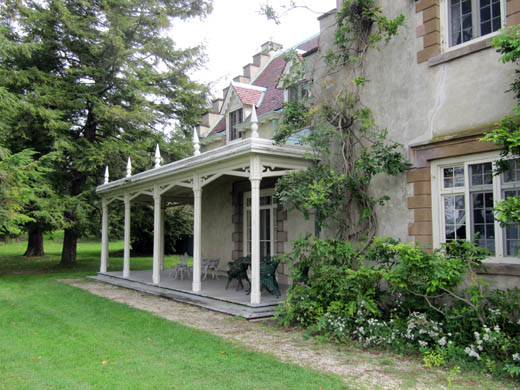 …to the “Spanish Tower,” which I image Irving found very olden-timey…

…to the ice house, designed by Irving himself in what a placard calls “a whimsical fashion conveying the look of a small Gothic chapel.”

Irving died in 1859, late enough to see the early medievalization of the Hudson Valley at nearby estates such as Lyndhurst but too soon to see just how nuts Americans would get about Gothic architecture. Many castle-like estates loom over the Hudson, including one built in Tarrytown between 1897 and 1910, just three miles from Irving’s home. Some of them have fallen into disrepair.

Irving would have enjoyed seeing medievalist follies sprout like mushrooms from New York cliffsides, but as his lively era recedes into obscurity, I wonder what he would have thought of his own reputation, if not his influence, becoming as much a part of “days of yore” and “olden times” as the real Middle Ages themselves.

Or maybe the era he never named helped prepare him for that: “And all for what? to occupy an inch of dusty shelf—to have the title of their works read now and then in a future age, by some drowsy churchman or casual straggler like myself; and in another age to be lost, even to remembrance. Such is the amount of this boasted immortality.”

2 thoughts on ““The stairs creak as you sleep, it’s keeping me awake…””