“The blog’s been quiet lately,” I hear yon straw man cry. “Why not head out to northwestern Maryland on a torturously cold morning to hunt for gargoyles?”

On a freezing Saturday morning, downtown Cumberland is abandoned. Markers and monuments festoon the courthouse grounds—including a statue of George Washington and a tribute to the Ten Commandments—but look up for a good view of the stony creatures large enough to catch the eyes of speeding drivers on nearby I-68.

Four porcine fang-bats haunt the corners of the courthouse tower. Were they this roughly hewn when they were raised into place, or have the mountain winds coarsened them in the past hundred years?

Like other architects of his era, Wright Butler had fun with his facade. He surrounded the main entrance with all sorts of carven vegetation, and it’s not unreasonable to look at his slim and pleasingly complex window bays and see hints of a cathedral, where modern-day windows might once have held saints.

Racing snow-clouds back to D.C., we pass through Hagerstown, stopping to gawk at Trinity Evangelical Lutheran Church, built in 1909.

The church’s huge bell tower is home to four magnificent beasties. Photographed head-on, they look as if they just flew in from a Japanese movie…

…but they’re best seen in profile, howling across generations, thwarted, bristling, forever out of time. 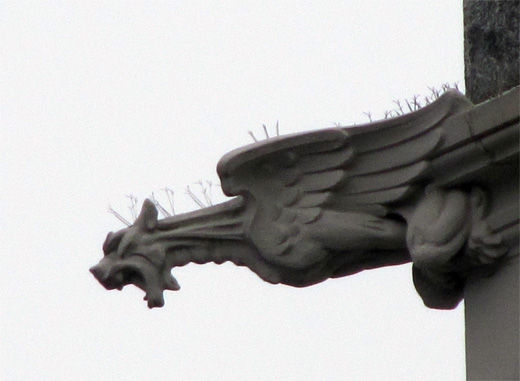 3 thoughts on ““Looking down on empty streets, all she can see…””