Colorado! Spectacular vistas by day, darkness and quiet at night—all draws for the vacationing medievalist. 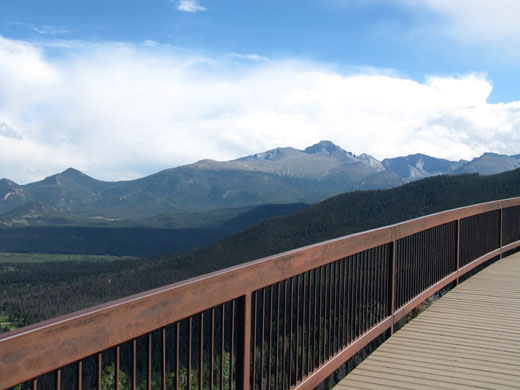 I was determined to take a mental vacation, to look past the state’s old, medieval-minded Missions and Gothic Revival buildings and dwell instead on the American West. Mountains! Sand dunes! Cowboys!

The Denver airport had other ideas. 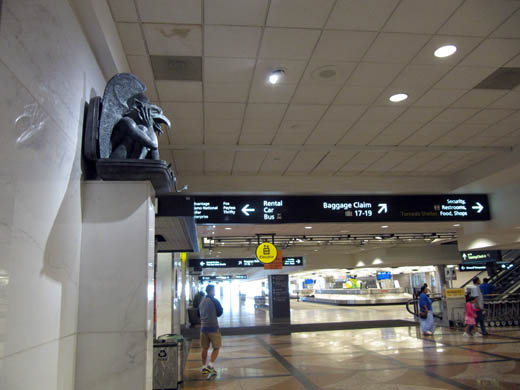 There he was, on a pedestal overlooking the baggage carousels: a familiar face. 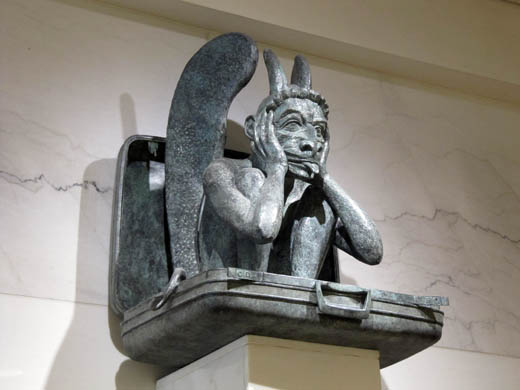 This guy is the most famous gargoyle from Notre-Dame in Paris—only he’s not a gargoyle, since he doesn’t spit water, and he’s not medieval, but a modern beastie grafted onto the building during a 19th-century restoration. Architect Eugène-Emmanuel Viollet-le-Duc, who oversaw the work at Notre-Dame, called these 54 replacement monsters chimères—chimeras. 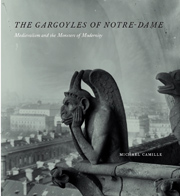 In his 2009 book The Gargoyles of Notre-Dame: Medievalism and the Monsters of Modernity, the late Michael Camille explains how these modern “chimeras” entered European and North American popular culture through engravings, etchings, photographs, postcards, paintings, and books—and how quickly the world forgot that they weren’t medieval creatures at all.

Ever since this monster—dubbed le stryge, or “the vampire,” by the engraver who made him famous—first glared down at Paris in the middle of the 19th century, no one has been sure what he is. The embodiment of evil? An icon of Romantic melancholy? An ambassador from an era that predated him by centuries? An antisemitic caricature? Is he bitter and apathetic, or contemplative and morose—or is he being cheeky? And what is he doing in Denver?

According to a nearby wall plaque, Notre Denver by artist Terry Allen has been installed here since 1994: “Historically, gargoyles were placed on buildings to protect the site. These are placed slightly above the travelers’ heads to oversee and ensure that baggage will arrive safely at DIA.” Popping out of a suitcase to protect travelers is a new role for le stryge, who’s now part of the Denver airport’s art program—although few people noticed him until they saw me snapping his picture. (The humungous Gamma World laser space mustang outside the airport is literally far more grotesque.)

Far across the baggage-claim area, le stryge has an unexpected counterpart. 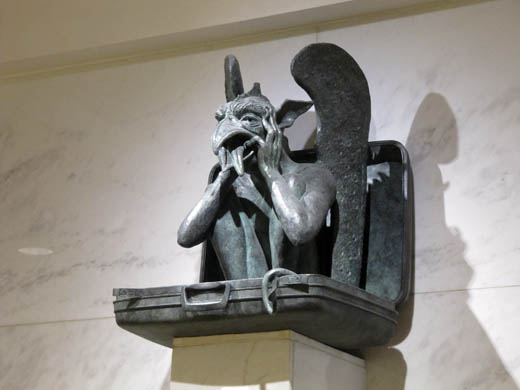 When I spotted this critter, I was certain I’d seen him before. I mentioned to my traveling companion that several of Notre-Dame’s 19th-century chimeras didn’t look “medieval” at all but reflected 19th-century France’s fascination with Egypt. Although that’s true, when I later flipped through The Gargoyles of Notre-Dame, past demonic birds, a goat, an elephant, a pelican, a wild boar, a two-headed dog, a (now destroyed) unicorn, and (lamentably) a Wandering Jew, I was surprised to find that the chimère I remembered didn’t look much like the statue in Denver at all. 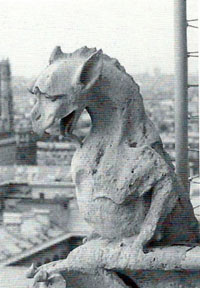 Le stryge is the only Notre-Dame chimera who makes that Home Alone gesture, and the birdlike face of this second monster only somewhat resembles one actual creature on the cathedral. This baggage-sentinel seems to be Terry Allen’s own invention, a horror that might exist if late one night, weary from another day of menacing glares, le stryge and his fellow chimera threw back too much Beaujolais nouveau, discovered a shared adoration of Edith Piaf, and one thing led to another…

So what are le stryge and his grotesque partner doing here? I could point out that 19th-century architect-designer Viollet-le-Duc and sculptor Victor Pyanet accomplished something akin to what Grant Wood did with American Gothic by creating something so recognizable and yet so enigmatic that people have never tired of seeing their own beliefs reflected by it.

Or perhaps artist Terry Allen, who appears to have a sharp sense of humor, got one over on the Denver airport authority by casting the miseries of air travel as downright “medieval.” One screeching infant or some surly cretin kicking the back of our seat, and we all might make such a face. 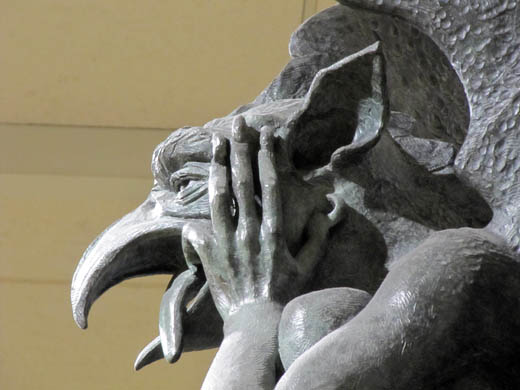 (Related post: Spotting the grand-nephew of the Notre-Dame chimeras on a pharmacy in Newark, Delaware.)

2 thoughts on ““A week without you, thought I’d forget…””