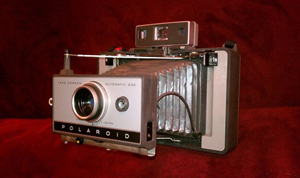 Back in December, when I picked up a mid-1960s Polaroid Land Camera at an antique shop in Savannah, I was eager to see if I could restore a neglected contraption to life—and of course, in keeping with the long-running theme of this blog, I wondered: Could it be used to find new angles on American medievalism?

A Land Camera is not versatile. There’s a manual focus bar, a two-option “lighting selector,” a wheel that makes pictures lighter and darker, and an electric eye that presumes to do the squinting for you. Development time depends on the air temperature, and each print leaves behind a photographic placenta in strips of chemical-drenched litter.

I don’t aspire to be a photographer; I’m learning how to use only this type of camera, with all its quirks and severe limitations. Quite a few people purport to post “Land Camera” photos online, but the artsiest shots are often produced by old cameras modified with newer professional lenses or attachments that let you use Polaroid instant film with sophisticated SLRs. That’s cheating. I want to coax good photos out of this clunker exactly as it is. Using a Land Camera is like writing a poem within strict formal constraints: Certain flourishes are simply impossible—but if we practice a little, what can we make it do?

With form in mind, but without further ado, here a few of my first decent attempts to capture day-to-day medievalism through the lens of an obsolete Polaroid. (Click on each photo to see a larger version.) 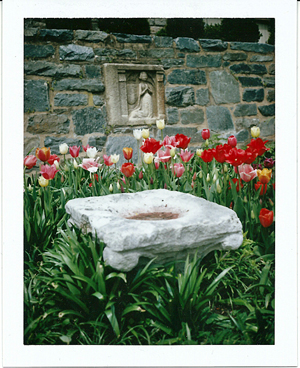 Every Easter, the All Hallows Guild at Washington National Cathedral plants gorgeous rows of tulips along the northern border of the Bishop’s Garden. This year, I saw Easter Sunday as an opportunity to test the Land Camera’s eye for color.

This picture was taken just to the right of the cathedral’s charming and temperamental medlar tree. That’s a 15th-century granite bas relief in the background; in the foreground, a weather-worn 13th-century limestone capital from Cluny now does humble duty as a birdbath.

When Fuji decides to stop producing this last line of color film for old Polaroids, the camera that took this photo will immediately become less useful after only five decades than this capital remains after 800 years. 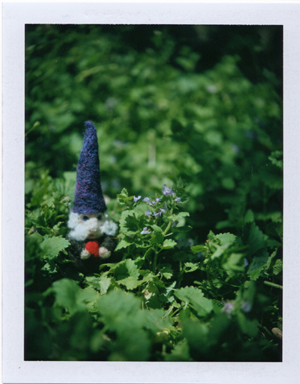 Polaroid didn’t offer an extensive line of accessories for the Land Camera, but their add-ons did include a “close-up kit” consisting of a snap-on lens and viewfinder for subjects 9 to 15 inches away. Polaroid co-founder Edwin Land was an optics genius; the camera’s bulk and its imprecise focus lever make the macro kit hilariously difficult to use, but it’s remarkable that such a lens exists for this camera at all.

I know what you’re thinking: “But Jeff, everyone knows that gnomes aren’t medieval! They spread across 19th-century Europe, especially France and England, after becoming highly popular home and garden decorations in German-speaking lands during the 18th century!”

Yes, that’s true—but see those tiny purple flowers? This is actually a photo of a patch of alehoof, the mint-like weed the Anglo-Saxons used in place of hops to give their ale its bitterness. The gnome? Totally just wandered into the shot.

This statue in front of the Embassy of Croatia is one of my favorite modern interpretations of a saint. It depicts a naked St. Jerome hunched over a large book and clearly in the midst of some unknowable fugue of frustration, perplexity, and fascination. That’s also the pained posture my grad-school friends and I assumed when we struggled our way through Jerome’s complex, sophisticated Latin.

At the mercy of the position of the sun and an old camera that over-emphasizes shadows, I’ve returned several times to try to re-do this shot. It’s not quite right, but I like the angle, and the suggestion, at first glance, of a larger story. 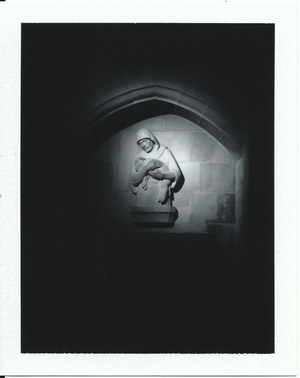 Sometimes you get lucky. In the crypt of the National Cathedral, there’s a stark little chapel lit only by indirect sun. On a frigid January afternoon, on one of my first Polaroid outings, I leaned on a pew and impulsively took a picture of a statue of the Good Shepherd. The resulting image stunned me; I couldn’t do it again if I tried.

Earlier this year, Fuji stopped making this fast black-and-white film, and I’ll deplete my own hoard of the stuff by early next year. Until then, I’ll expand my repertoire of tricks, try to reframe medieval-ish subjects when I see them, and keep learning how to use this camera based on what shadow and sunlight demand.