After the artists at a major art center in Virginia asked me to do some writing for them, I was delighted when they kept me busy for nearly two years—and surprised when their work pushed me back toward the visual arts after a 20-year lapse. I’m now fumbling with media I saw others handle so masterfully, but the most challenging project by far has been prying (sometimes literally prying) interesting photographs from three mid-1960s Polaroid Land Cameras.

As I’ve written before, A Land Camera is not versatile. Although it has a focus bar and other manual controls, an electric eye presumes to do much of the squinting. There’s no zoom, development time depends on the air temperature, and the prints leave behind photographic placentas in strips of chemical-drenched litter.

I don’t aspire to be a photographer; I’m learning to use only this type of camera, with all its quirks and severe limitations and almost no reliance on Photoshop. Using a Land Camera is like writing a poem within strict formal constraints: Certain flourishes are simply impossible—but if we practice a little, what can we make it do?

It helps to have an obsessive theme—and so from time to time, I haul my cameras out into the world in the hope of framing glimpses of medievalism in snapshots. Over time, maybe, this project will find its focus.

I love the little neon mujahed on this sign in Ocean City, Maryland. Four things helped me take this low-light photo: a tripod, a homemade Lego camera stand, electrical tape, and a beatifically indifferent night manager.

Although Ocean City is flashy and bright, I had to keep the shutter open for five seconds, which shows you just how light-hungry these old cameras can be.

I spent the day before Columbus Day doing research at the Johns Hopkins library—but when I was done, I roamed the city looking for something medieval to photograph. There’s a statue of William “Braveheart” Wallace along the reservoir in Druid Hill Park, but the afternoon light fell far more serendipitously on this Christopher Columbus monument from 1892.

What hath Columbus to do with the Middle Ages? He loved the travel stories of Mandeville and Marco Polo, he was beguiled by medieval legends about marvelous islands to the west, and on his third journey, he was sure he’d located the Earthly Paradise. He hoped his Atlantic voyages would ultimately convert the Chinese emperor to Christianity and help fund a new crusade to reclaim Jerusalem. Quoth historian Luis Weckmann: “Columbus, the first link between the Old World and the New, stands in a clearer light, perhaps, if we envisage him not so much as the first of the modern explorers but as the last of the great medieval travelers.”

No, gnomes aren’t medieval, but they are rooted in 19th-century European medievalism, and there’s certainly a medieval tradition of wee woodland beings making trouble for us humans. Some Anglo-Saxon charms even blame certain types of pain and disease on wicked little “elves.” (Plus, this gnome is made out of felt, the discovery of which is rather dubiously attributed to saints Clement and Christopher.)

At only four inches high, this fellow gave me a excuse to practice using the special Polaroid “close-up kit.” This picture doesn’t illuminate anything particular about the American penchant for medievalist fantasy, but it did teach me that when you’re on your belly in the grass at noon on a hot summer day photographing gnomes with an antique camera, the cops slow down to get a better look at you. 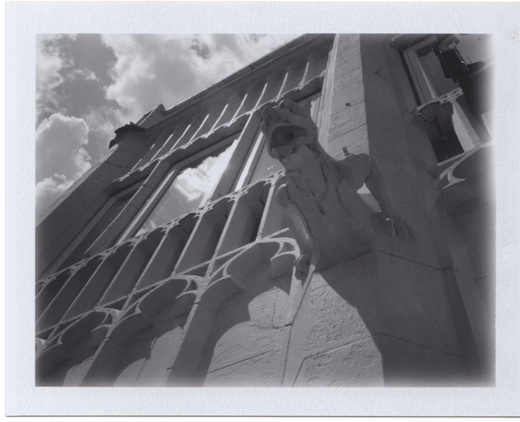 This Gothicpalooza facade on the bagel shop at 36 East Main Street in Newark, Delaware, contrasts sharply with the quaint Colonial Revival campus of the University of Delaware campus just footsteps away. The facade’s two beasties have looked down on the drunk and the un-drunk alike since 1917, when the building was a pharmacy. As I wrote back in 2013, I’m convinced they were inspired by specific grotesques at Notre-Dame in Paris.

Sometimes you get lucky. In the crypt of the National Cathedral, there’s a stark little chapel lit only by indirect sun. On a frigid afternoon last January, I leaned on a pew and snapped a quick picture of this Good Shepherd statue. The resulting image startled me; with these old cameras, light and luck are always intertwined.

Last year, Fuji stopped making this fast black-and-white film, so I’m brooding, dragon-like, over a hoard of it. It’s possible that I’ve chosen the wrong tools for the task, and that lingering traces of the Middle Ages demand a sharper lens. We’ll see. For now, I’ll keep learning how to use old cameras that thrive on what shadow and sunlight demand.

5 thoughts on ““It’s not the way you have your hair, it’s not that certain style…””