[Last year, when this blog was new and its readership was still rather small, I posted a story about the Twin Towers during better days. Here it is again, a small tribute to the connections we make with mere buildings.]

He told us about it our entire lives: the Hudson Toimnal, big as a city, born in Manhattan a year before he was. He could glimpse it by chance from his Gammontown stoop, or he could sneak to the rooftop for a better view, peering over three storeys of sooty clotheslines at the peaks of its twin towers. He later spent a decade there, twenty-six storeys up, crawling on beams over deep black shafts as he kept the elevators running.

“That was some building,” he’d say, wiring up a toaster at the kitchen table, cracking a dead can opener in two. “They don’t make ’em like that no more.”

Shuffling to the cellar to study his switches and knobs, he hummed old songs through the few teeth left in his head. We heard the clack of the latch as he passed through the double doors, twin relics of his long-gone career. They were part of a Hudson Toimnal phone booth; he had hauled them home on a commuter train long before the towers came down.

He showed us his past in one fading brown snapshot: It’s 1934, and a skinny mechanic swings from rope-and-rag stirrups; he’s painting the northmost flagpole, a massive “U D S” behind him in awesome reverse. He’s only 25, but his smile says he’s the happiest man in Manhattan, with good reason: He’s hundreds of feet above the busy sidewalks, earning a rare day off from the best job he’ll ever have.

Sixty years later, the man in that photo surprised me. For all his talk about the Hudson Toimnal, he never expressed much interest in seeing its replacement—until one autumn morning, when he said that we should go.

As skyscrapers loomed over the deck of the ferry, I wondered what was happening at work.

“In them days,” he told me, “you wouldn’t dare take a day off. You take too many, they figured they could do without you.”

At the Battery, he gave a punk a cigarette and stared at the piers in confusion. “I don’t recognize none of this,” he insisted, but I pushed him through crowds of commuters and straight into the tourists. They were waiting to take the same elevator we were.

“I sure hope the cable doesn’t snap,” some jerk said, earning rueful snickers on the long ride up.

“Cables don’t break,” came the quiet rebuttal after we reached the top, “but if they do, the brake jaws grab the guide rails. That keeps the car from falling.” He was at home here, and still on the job.

But when we took the final escalator to the observation deck, he was silent for far too long. He studied the skyline. We were now a thousand feet higher than the flagpoles he had painted; all of it had changed.

Sad and lost, he shuffled his way to the western side. There he stopped, and began scanning for landmarks across the river—until, amazed to have sighted a familiar face, he rushed to a viewfinder, stuck in a quarter, and spun it straight toward the street where his childhood was.

He talked for weeks about what he’d beheld. “I thought the Hudson Toimnal Building was something,” he said. “But them Twin Towers…”

We heard less about the Hudson Toimnal Building after that, and for a while I forgot about the fading old photo. Five years later, I saw it again, in an envelope he left with my name on it.

Today, I keep it with a snapshot of my own: An old man visits a famous building that stands on top of his past. His hands grip the railing, as if a good gust might blow him away—but then he smiles, turns his ballcap backwards, and peers through the viewer, squinting to see where he’s been. 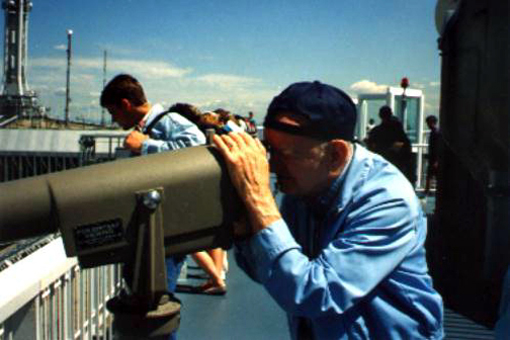