Growing up in Central Jersey, I never thought to pause and ponder quasi-medieval statuary, mostly because we didn’t have any—or so I thought until this weekend, when I drove through Bound Brook and decided, on a whim, to check out a monument that’s landed in my peripheral vision on and off for more than 20 years. 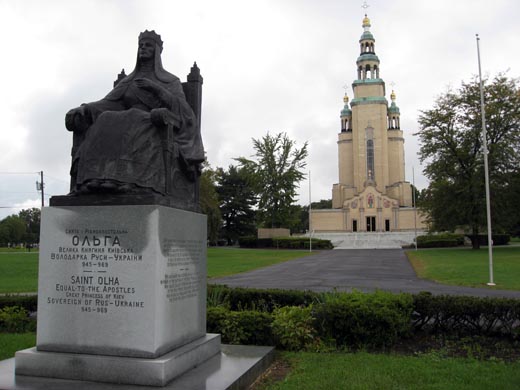 That’s St. Olga, seated in majesty. Behind her is a memorial church for the victims of Stalin’s famines; behind that is a lovely, tree-lined cemetery; and the entire area is part of the larger headquarters of the Ukrainian Orthodox Church of the USA, otherwise known as the Ecumenical Patriarchate of Constantinople.

So who was St. Olga? Before her death in A.D. 969, Olga was the first ruler of the Rus to convert to Orthodox Christianity. Baptized in Constantinople, she ruled Kiev on behalf of her son and sent an embassy westward to Emperor Otto I. She was the grandmother of Prince Volodymyr—Vladimir—who proclaimed Orthodox Christianity the official religion of Rus-Ukraine. You know those emissaries who came back from Constantinople and famously said of Hagia Sofia, “We knew not whether we were in heaven or on earth”? Those were Vladimir’s men.

Olga was not a nice lady. True to her Viking roots, she avenged her husband by burying his killers alive in a ship. She also sent smoldering doves to alight on the thatched roofs of an enemy town, which then burned down.

In Bound Brook, sculptor Petro Kapschutschenko has made a remarkable monument to the Kievan Rus regent. Olga is elevated, as an enthroned Byzantine empress would have been, reminding visitors of her superiority and making it impossible for anyone to look her in the eye. Viewed straight on, Olga seems remote but amused, as if she just condemned the director of a TaTu video—but in profile, her face is a mixture of dignity and visible cruelty. 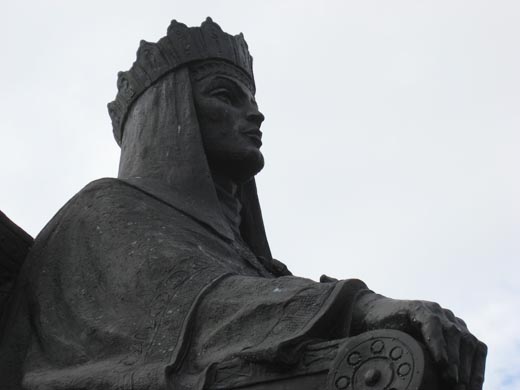 Next to the church is another striking Kapschutschenko sculpture of a 20th-century archbishop raising his hand heavenward. Also on the grounds are the home and resting place of the local Dutch Reformed dignitary who witnessed the signing of the Declaration of Independence and then returned home to read it aloud to the people of Bound Brook.

But there, reigning at the gates, is Olga. As she deigns to rest her royal gaze on the run-down repair shop across the street, she’s a reminder of the Vikings who lent their name to Russia—and one reason why Russia, a thousand years later, still glares possessively at the Ukraine. 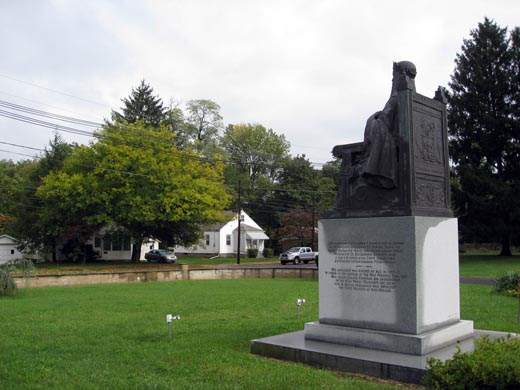 One thought on ““A built-in remedy for Kruschev and Kennedy…””