Iceland and Camelot rarely collide—which is why I was pleased to find, via Adrian Murdoch, this perplexing headline:

As Murdoch points out, this story is “Dan Brown in 200 words”:

In Botticelli’s “Primavera” a series of numeric symbols form the date March 14, 1319, which somehow supports Gianazza’s theory, and in da Vinci’s “Last Supper” Gianazza believes to have found outlines matching the landscape at Kjölur.

Further clues were found in Dante Alighieri’s “Divine Comedy” and an ancient Icelandic script states that poet and politician Snorri Sturluson was accompanied by “eighty armored Eastmen” at the Althingi parliament in 1217, who could have been the Knights Templars.

To assuage the disappointment of these ardent questers, I offer an alternate headline:

However, a quest through the kitchen here at “Quid Plura?” headquarters did turn up a Serbian Coke bottle, a possibly stolen coffee cup from the University of Iceland, a can of Edward G. Robinson pipe tobacco, a Pac-Man tumbler, and a Newfoundland “Viking Millennium” souvenir mug. 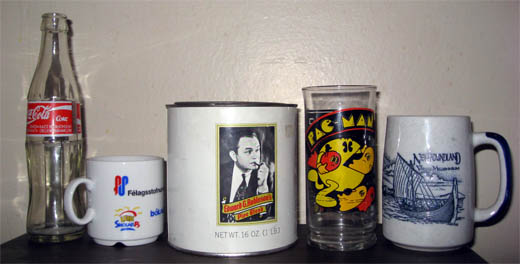 Two Iceland-themed drinking vessels? That’s no coincidence, especially not when “Pac-Man” so closely resembles Old Norse *pakki-maðr, “man carrying a bundle.” And what is a pipe but a small, skinny, smokable grail? I confess, I don’t see how the Coke bottle completes the message, but one anagram of “Serbian” is “i b n arse.” Whatever can it mean?

4 thoughts on ““In vain they struggle for the vision fair.””