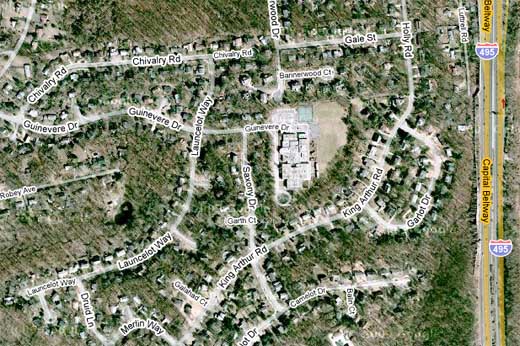 Unlike the occasional cul-de-sac dubbed “King Arthur’s Ct.” by some card of a developer, the Camelot neighborhood along the Beltway appears to have been mapped out around 1966 by someone whose knowledge of Arthurian legend wasn’t entirely facile. Lancelot, Merlin, Guenevere, and Arthur are all here, but characters who rarely surface in popular Arthuriana are also represented by such stately addresses as Balin Court, Bedivere Court, and (my favorite) Pellinore Place. Charmingly, Lancelot Way meets Guenevere Drive while King Arthur Road does not—although King Arthur Road does cross Saxony Drive before turning into something else.

There’s no Mordred Avenue, but the residents of this particular Camelot probably hope their neighborhood leans toward Lerner and Loewe rather than Tennyson. Mortgages and foreclosure are mundane subjects for Arthurian legend, but nowadays “my house hath been my doom” might hit too close to home.