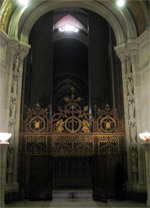 In the murk of winter, the Cathedral of St. John the Divine makes you wend your way backwards through time—across traces of terrible fire, beneath vaulting conceived Romanesque but raised Gothic, past altars that look far older than they are. In the end, behind the sanctuary, is the beginning: the cathedral’s oldest chapel, where the saints of the Eastern church—Origen, Ignatius, Chrysostom, Basil—reign in their respective niches.

Across from them, around the portal, stand columns of angels. Though stacked head to toe, they rarely catch the eye, and they’ve gone largely unnoticed since 1905, when for one week, all New York was called to ponder them.

Gutzon Borglum was 38 years old. He had trained in Paris with Rodin, and his public monuments would soon rise across the United States, but for now, fame eluded him. A decade away from failing to carve Robert E. Lee into Stone Mountain and two decades before sculpting Mount Rushmore, Borglum set his mind and hands alike to a modest task: the careful making of angels.

Strongly nativist even by the standards of his day, Borglum admired the Klan, and the world would soon deem him cranky, stubborn, and confrontational. Yet the sculptor was none of those things on October 4, 1905, when Episcopalian officials stopped by his studio to see his plaster casts:

The clergy were admiring them when the up-State clergyman stopped before two statues, and broke the silence with this:

“Whoever heard of a woman angel?”

The clergy gasped: then the truth dawned upon them. For hundreds of years all over the world art had been depicting angels as female and in no place in the Bible could it be ascertained that angels were other than male.

The questionable figures were two of twenty angels meant for the Chapel of St. Saviour: the Angel of the Resurrection and, more sensitively, the Angel of the Annunciation. “It seems to me,” Borglum would later say, “that it is repugnant to every gentlemanly sense to conceive of a man performing that role. The idea is such a delicate one that I made the figure of even the woman shrink back after she had told the Virgin, as if it was almost too sacred a thing for her to put into words.”

Angelology focused the minds of New Yorkers. After claiming in its report on Borglum that 15th-century painter Fra Angelico had depicted female angels, the New York Times drew the ire of an anonymous Jesuit:

A headline on Page 6 of your to-day’s issue tells the public “We’re Wrong About Angels.” Indeed you are—you.

It would be interesting to know of one period or one picture where art has “depicted women angels.” As for Fra Angelico da Fiseole, he was a follower of Church tradition and of scholastic philosophy: the former of these invariably represents angels as appearing in the likeness of young men, while the latter teaches that angels are really incorporeal and sexless. Christian art, conventionally obliged to choose a sex for its angels, followed the hint given by the language of the Church, which invariably makes the names of the angels masculine—”Sancte Michael, Sancte Gabriel, Sancte Raphael,” never “Sancta.”

A day later, the Times replied with a cheeky editorial:

If Mr. BORGLUM had taken the trouble to read his New Testament in Greek before putting hand to clay on his commission for angels he would have avoided this shocking error in sex. He would have noted that AGGELOS is neither feminine nor neuter, but masculine, and so your angel must show in some fashion that he belongs to the tyrant sex. Bootless the plea that HOMER makes the lovely Iris a messenger of the goddess, and the Edda introduces the Valkyrs, who are tomboys, if you will, but maidens ever fair, as messengers of Wotan. These be pagan toys with which a properly Christian sculptor has naught to do . . . The book—what does the book say? Well, it says that angels are masculine. There you are.

Of course there must be women angels in heaven, for even MOHAMED stocks his Paradise with houris, but they never come down . . . Very likely the sensibilities of lady angels are too fragile to stand the coarseness of human life. Suppose one of them should light upon a wife beater, or see a car on the Brooklyn Bridge with forty men seated and thirty women standing! . . . We believe that with the astuteness of the fair sex raised to a heavenly degree these lady angels leave such chores to the males.

As newspaper nationwide chattered about Borglum’s angels, Dr. William Reed Huntington, chairman of the cathedral’s Sculpture Committee and the most influential Episcopal priest of his generation, fielded odd questions:

“I think in sacred art, as far as I know, face and form never indicate either male or female, but I must confess I never saw an angel with whiskers.”

“Or a moustache, doctor?” he was asked.

“No. Nor a moustache,” he replied.

“From some source or other,” ran a coy report two days later in a Pennsylvania paper, “came a horrid rumor that Mr. Borglum intended to put whiskers on the faces of his angels, so that there could be no question hereafter as to their sex.”

Voices rose, less a choir than a din. The New York Christian Herald hinted that the debate was a silly one, for where does scripture consistently show that angels even have wings? The New York Evening Post cited Emanuel Swedenborg on the existence of female angels. At the behest of newsmen, Jewish Encyclopedia editor Joseph Jacobs sifted through the Kaballah.

Borglum’s supporters minimized what happened next. In 1952, his wife Mary lamented that the affair “put upon the sculptor a stigma, a mark of an evil temper, which he carried to the end of his life.” A sympathetic 1961 biography suggested that the incident never happened at all.

Yet press reports from the following week are clear: Gutzon Borglum smashed the two offending angels:

I felt like a murderer, but that was the only thing to do under the circumstances . . .

I didn’t want an express man to haul them away to be stored somewhere. I didn’t want any one to touch them except myself. So I simply broke them to pieces myself, and I should hate to tell you how I felt when I did it.

Oh yes, I am under contract to do that work for the Cathedral. The word came that the angels must be men, and men they shall be.

That gentle, elegant sculptures proceeded from Borglum’s hands speaks well only of his talent; art and virtue are often estranged. Still, the sculptor showed surprising grace a few days later when he explained his plan for the cathedral’s first chapel:

The group was described by a text from the New Testament: “I piped to you, and ye did not dance.”

It symbolizes the despair of a woman who, finding that her appeal to the man’s higher nature has failed, turns away from him, and only the ensuing silence awakens him.

“I was impressed with the idea in this way,” said Borglum. “I went to a concert with a friend and heard Ysaye play one of Brahms’s compositions exquisitely. I was moved, delighted, enthusiastic, and I turned to my friend to discuss it with him. He was silent, the music had not touched him, we could not meet, and I was disappointed.”

A century later, most pilgrims to “St. John the Unfinished” scarcely glance at Borglum’s reverent, unironic angels, and no one remembers what they represent. At least two of the statues recall a week when angel faces roused pedantry, dogmatism, or scorn in otherwise decent people. Only Borglum, in the wake of his outburst, enshrined a contrary notion: that infamous people can bring about beautiful things.

In a season of hope, pause before Borglum’s angels, which a 1937 guidebook called “worthy of more than passing notice.” They may not move you, but when you know what they’re saying, they never seem silent again.

4 thoughts on ““What would an angel say? The devil wants to know.””