Friends tell me I’m underzealous in promoting my own books. I see this blog as something other than a relentless sales pitch—but since April is the dubious “National Poetry Month,” it’s time to tout two titles. I’ll say only this: If you enjoy the way this blog chases down medievalism in everyday life, then the “Quid Plura?” team of kobolds would be grateful for your support. 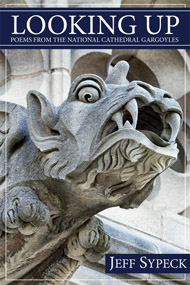 In 2009, after promoting my Charlemagne book and working on projects for other people, I was word-weary and exhausted. To make writing fun again—without worrying about marketability, editors’ impressions, or other people’s needs—I started composing poems inspired by the gargoyles and grotesques that adorn my friendly neighborhood neo-Gothic cathedral.

Light verse! Sonnets! Strange soliloquies and songs! Translations from Latin and German! Three years and more than fifty poems later, the folks at the cathedral graciously gave me permission to show their typically publication-shy beasties in print. The resulting book, Looking Up: Poems from the National Cathedral Gargoyles, is now available at the cathedral gift shop, through Amazon, or (most profitably) directly from me. I’ll donate 75 percent of the net profits to the National Cathedral to help repair damage from the 2011 earthquake. It’s my way of saying thank-you for the many quiet afternoons I’ve spent on the cathedral grounds. (Browse the first drafts of 51 of the 53 poems, and learn more about the book here.)

In 2007, I translated the 15th-century romance “The Taill of Rauf Coilyear,” a 972-line Middle Scots poem about the kerfuffle that ensues when Charlemagne, separated from his entourage by a snowstorm at Christmastime, seeks refuge in the home of a proud and irascible collier (a sort of medieval Tommy Saxondale). Combining folklore motifs with burlesque humor and elements of chansons and chivalric romances, “Rauf Coilyear” is a lively but rarely-read tale of courtesy, hospitality, and knighthood. To my knowledge, it’s also the only medieval romance in which Charlemagne totally gets slapped in the face.

The translation was an experiment: I wanted to see if I could imitate all 75 of the original poem’s tricky rhyming, alliterative, 13-line stanzas in a translation that was both readable and entertaining. (Check out “The Taill of Rauf Coilyear” in its original Middle Scots to see what I was up against.)

The Tale of Charlemagne and Ralph the Collier is now available through Amazon as a $10 paperback. There’s also an e-book specially formatted for the Kindle. (To get a taste of the translation, sample this low-res PDF of the first few pages.)

No one else has translated “Rauf Coilyear” into rhyming, alliterative, modern English verse, and I doubt anyone else will be nutty enough to try—so whether you’re a longtime reader of this blog, a student of medieval literature, a fan of old-fashioned poetic formalism, or a collector of truly obscure manifestations of Charlemagniana, I hope you’ll find this translation a satisfying read. Despite what Mamillus claimed, sometimes a sad tale isn’t best for winter after all.