My Garden State relatives and friends survived Hurricane Sandy with incredible stories to tell about living in darkness, dealing with looting and theft, and almost being flattened by trees. Over the weekend, while hanging out with family in my great homeland, I drove down the shore to see the worst of it for myself. 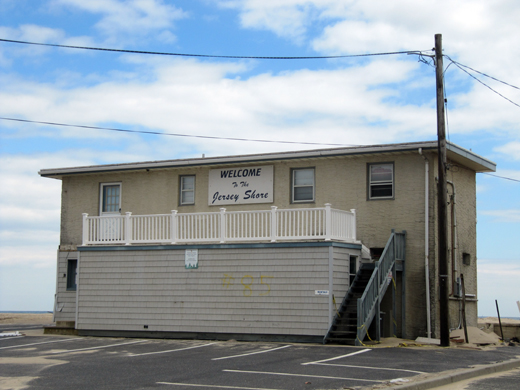 The ride along Route 35 was as heartbreaking as I expected, but Jersey attitude is a universal constant. On a sunny April weekend, one of the surviving chunks of the Seaside Heights boardwalk was so busy that a carny let down his guard to marvel at how “jumpin'” it was. 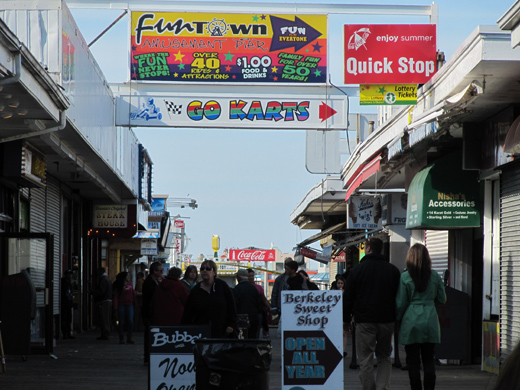 Folks were there to wander around, chow down on pizza and pork roll—and yes, to gawk. If you’re from New Jersey, then someplace you love was likely destroyed.

For example, beyond this sign, there used to be a 200-foot pier. 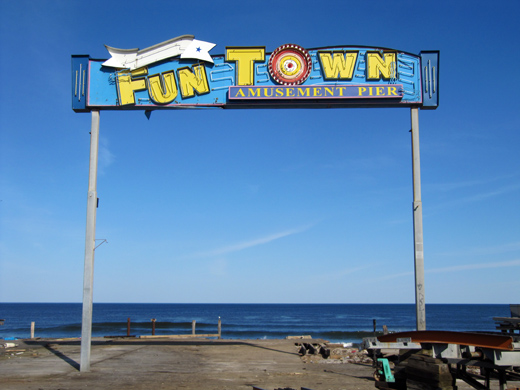 I’m not about to share gratuitous disaster photos; this blog is about finding medievalism. Even in the aftermath of Sandy, Dame Medievalism staggers drunkenly up and down the Jersey Shore—as long as you know where to look.

Although the storm wiped out Casino Pier in Seaside Heights, its jolly streetside facade survives, keeping out the curious…

…while across the street, a Viking watches and waits.

At Point Pleasant Beach, Jenkinson’s Boardwalk is mostly restored. The tiki bar is open, the zeppoles smell terrific, and the kiddie amusements are whirring away—including this iconic ride that invites you to fling yourself inside a dragon’s gaping chest cavity.

Up the road in Long Branch, my new favorite building defied Sandy: the Church of the Presidents, an 1879 masterpiece of carpenter Gothic that highlights what the Jersey Shore has always been known for: restraint and good taste. 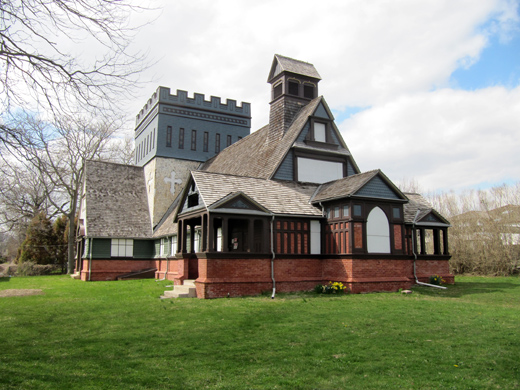 Up in Rumson, on a charmingly landscaped plot around 1,500 feet from the beach, St. George’s-by-the-River looks like a nice, straightforward Episcopal church…

…until you realize that from one corner of its tower looms a gargoyle—the only such monster I can recall with an identifiable, even incontrovertible sex.

This weekend I saw awful sights: oceanside streets still buried in sand, bungalows tossed into piles and smashed, and one of my favorite childhood places destroyed. I also saw residents busy with shovels and saws, workers rebuilding boardwalks with heroic speed, and locals who want the world to know they’re very much open for business. At the risk of irreverence, all I can say is that if a topless gargoyle from 1908 can survive Sandy, the Jersey Shore will too, with the tenacity of medieval myth. It’s amazing what endures.

2 thoughts on ““Look, a golden-winged ship is passing my way…””