I don’t actively look for these things. No, sometimes I just happen to be visiting family in New Jersey when I pull off the highway to skirt some traffic, drive through an unfamiliar downtown, and HOLY CROW—

This glorious seventeen-minute Thompson Twins dance remix of a house was built in 1892 by the local mortician as a wedding gift for his bride. All of the other mansions on Stockton Street in Hightstown gaze on it in wonderment and envy, because even though the asymmetrical Elmer Rogers House isn’t really Gothic in design (it’s more of a Queen-Anne’s-flashy-American-cousin), check out what it does have.

Monsters on the roof!

Leering beasties on the highest peaks!

Every shingle, every tile, every baluster and brace sports a carefully chosen color, and other photos show that the flags and awnings change with the seasons. (The house is also festooned with little fleurs-de-lys.)

The front yard is a choreographed riot of medievalism: an angel, a saint… 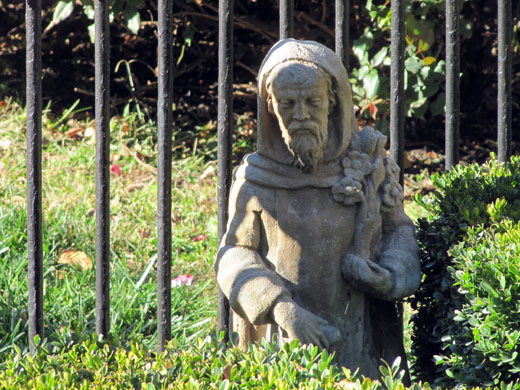 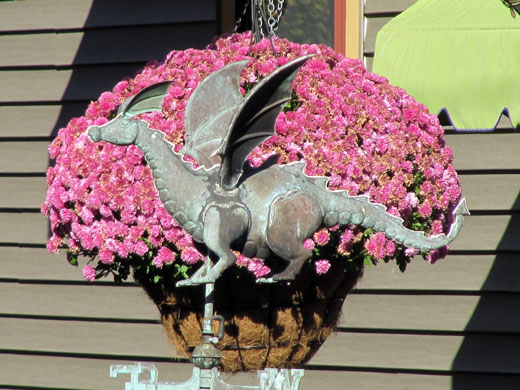 So why has the Rogers House spawned a quasi-medieval fantasy world? Maybe that round turret screams “castle” to the current owners, or perhaps the meticulous, old-fashioned care necessary to restore and curate such a monumental home feels “medieval” to Americans who are inclined to collapse the past into a blur of “olden times,” when skilled craftsmen begat gargoyles, dragons, angels, and saints.

Or maybe their motive is more timeless. People variously perceive the medieval world as teetering between austerity and chaos, ignorance and enlightenment, but the owners of the Rogers House endorse a different predilection, one that’s never as common as it ought to be but which does have its place in the Middle Ages, as long as you know where to look: a pure, prismatic delight.

One thought on ““And it’s true, if all this around us is paradise…””