American Halloween may be the most medieval of holidays, even if the omnipresence of New World pumpkins obscures its already murky traditions. Most people carve jack-o’-lanterns, for example, without wondering why the heck they’re doing it. The curious can look to Irish folklore, to a tangle of tales about a scoundrel named Jack whose evil deeds keep him out of Heaven but whose tricks sufficiently infuriate the Devil to bar him forever from Hell. With nowhere to go after death, Jack roams the earth, his path lit only by the glow of an ember in a hollowed-out turnip.

Between the eighth-century inception of All Saints’ Day in Rome and the pre-Christian celebrations of Samhain, I see no harm in presuming that the jack-o’-lantern tradition is medieval too. And so last October I turned to my more sensible half and asked her: “Why doesn’t anyone carve turnips anymore?”

As it turns out, Old World jack-o’-lanterns are weirdly easy to make. Cut off the top, scoop out the brains with a melon baller, and use one of those cheap little mini-saws—they’re sold every autumn as pumpkin-carving tools, although they’re nigh-useless on the real thing—to turn a humble, bulbous root into an eerie little sentinel.

We found these—the largest turnips I’ve ever seen—at a roadside produce market out here in the Maryland boonies. The taproots add unexpected spookiness, and the skin is thick enough that you can hang them with a head full of tea-light without worrying that they’ll break and fall.

Should you suffer pumpkin withdrawal, you can easily give your lantern the traditional jagged leer.

So why did lantern-carving immigrants from the British Isles turn in their turnips for all things cucurbita? Some people have suggested that North American turnips tend to be smaller than their New World cousins, and thus harder to carve, but I don’t think that’s it; rather, pumpkins have one clear advantage over hollowed-out turnips. Carved pumpkins can survive with their dignity intact for days or weeks if the weather’s right and squirrels don’t get into them—but our Old World jack-o’-lanterns lasted only two or three days before their little faces wizened into unrecognizability. A damned soul wandering the night for all eternity needs better visibility than that. On the other hand, turnips are faster and safer to carve and much less messy, so we’re happy to light them along our porch as tokens of fleeting glory, retelling a legend the centuries never quite quenched. 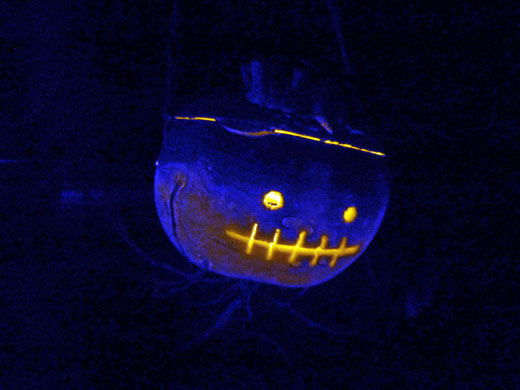 7 thoughts on ““No one could find me on their own, I’m off the beaten track…””