As the teacher in my household prepares to steer her ninth-graders through tricky literary currents, she’s revisiting The Adventures of Huckleberry Finn; I’ve hopped aboard and joined her on the raft. I read Twain’s novel when I was 14, but returning to it more than three decades later has been a revelation. I hadn’t expected to find that the natural focus on slavery and race had obscured Twain’s other related ideas.

I’m probably the last adult reader to notice what makes it such a rich and challenging book: the perfect ease of the narrative voice, the tender passages about life on the river, and the wrenching moments when Huck starts to comprehend Jim’s humanity. And holy crow, Huck Finn is an epic catalog of the deficiencies and absurdities of the antebellum South: family feuds of long-forgotten origin; the poisonous grafting of codes of honor to lawlessness and mob violence; and grifters peddling phrenology, cynical revivalism, and mutilated Shakespeare to yokels who fully deserve to be conned. I can’t be the first person to imagine that the movie O Brother, Where Art Thou? owes far more to Huck Finn than to The Odyssey for its episodic mythologizing of Southern culture. 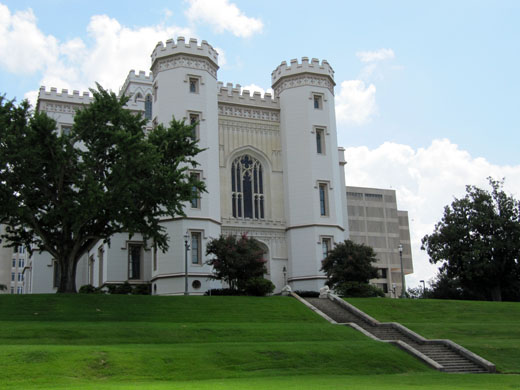 What leaped out at me the most, though, is Twain’s full-on satire of people who take their entertainment way too seriously. I’ve written before about the chapter in Life on the Mississippi where the state capitol in Baton Rouge ignites Twain’s rant about the South’s destructive obsession with the Middle Ages:

Sir Walter Scott is probably responsible for the Capitol building; for it is not conceivable that this little sham castle would ever have been built if he had not run the people mad, a couple of generations ago, with his medieval romances. The South has not yet recovered from the debilitating influence of his books. Admiration of his fantastic heroes and their grotesque “chivalry” doings and romantic juvenilities still survives here, in an atmosphere in which is already perceptible the wholesome and practical nineteenth-century smell of cotton-factories and locomotives; and traces of its inflated language and other windy humbuggeries survive along with it. It is pathetic enough, that a whitewashed castle, with turrets and things—materials all ungenuine within and without, pretending to be what they are not—should ever have been built in this otherwise honorable place; but it is much more pathetic to see this architectural falsehood undergoing restoration and perpetuation in our day, when it would have been so easy to let dynamite finish what a charitable fire began, and then devote this restoration-money to the building of something genuine.

By itself the imitation castle is doubtless harmless, and well enough; but as a symbol and breeder and sustainer of maudlin Middle-Age romanticism here in the midst of the plainest and sturdiest and infinitely greatest and worthiest of all the centuries the world has seen, it is necessarily a hurtful thing and a mistake.

Twain is sincere in his loathing of romanticism, but in Life on the Mississippi he’s too blunt and unfunny about it to sound like anything but a crank. In Huck Finn, published two years later, he more effectively vents his ire through the excesses of Tom Sawyer, whose mania for tales of adventure tests the patience of his more practical friend:

We played robber now and then about a month, and then I resigned. All the boys did. We hadn’t robbed nobody, hadn’t killed any people, but only just pretended. We used to hop out of the woods and go charging down on hog-drivers and women in carts taking garden stuff to market, but we never hived any of them. Tom Sawyer called the hogs “ingots,” and he called the turnips and stuff “julery,” and we would go to the cave and powwow over what we had done, and how many people we had killed and marked. But I couldn’t see no profit in it.

One time Tom sent a boy to run about town with a blazing stick, which he called a slogan (which was the sign for the Gang to get together), and then he said he had got secret news by his spies that next day a whole parcel of Spanish merchants and rich A-rabs was going to camp in Cave Hollow with two hundred elephants, and six hundred camels, and over a thousand “sumter” mules, all loaded down with di’monds, and they didn’t have only a guard of four hundred soldiers, and so we would lay in ambuscade, as he called it, and kill the lot and scoop the things. He said we must slick up our swords and guns, and get ready.  He never could go after even a turnip-cart but he must have the swords and guns all scoured up for it, though they was only lath and broomsticks, and you might scour at them till you rotted, and then they warn’t worth a mouthful of ashes more than what they was before. I didn’t believe we could lick such a crowd of Spaniards and A-rabs, but I wanted to see the camels and elephants, so I was on hand next day, Saturday, in the ambuscade; and when we got the word we rushed out of the woods and down the hill. But there warn’t no Spaniards and A-rabs, and there warn’t no camels nor no elephants. It warn’t anything but a Sunday-school picnic, and only a primer-class at that. We busted it up, and chased the children up the hollow; but we never got anything but some doughnuts and jam, though Ben Rogers got a rag doll, and Jo Harper got a hymn-book and a tract; and then the teacher charged in, and made us drop everything and cut.

I didn’t see no di’monds, and I told Tom Sawyer so. He said there was loads of them there, anyway; and he said there was A-rabs there, too, and elephants and things. I said, why couldn’t we see them, then?  He said if I warn’t so ignorant, but had read a book called Don Quixote, I would know without asking. He said it was all done by enchantment. He said there was hundreds of soldiers there, and elephants and treasure, and so on, but we had enemies which he called magicians; and they had turned the whole thing into an infant Sunday-school, just out of spite. I said, all right; then the thing for us to do was to go for the magicians. Tom Sawyer said I was a numskull.

Huck and Tom argue about wizards and genies, and Huck decides to test his friend’s claims. It’s one of many times when he tries on the world-views of others as he struggles to work out his own:

I thought all this over for two or three days, and then I reckoned I would see if there was anything in it. I got an old tin lamp and an iron ring, and went out in the woods and rubbed and rubbed till I sweat like an Injun, calculating to build a palace and sell it; but it warn’t no use, none of the genies come. So then I judged that all that stuff was only just one of Tom Sawyer’s lies. I reckoned he believed in the A-rabs and the elephants, but as for me I think different. It had all the marks of a Sunday-school. 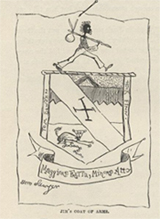 Of course—spoiler alert for time-traveling readers from the 1880s—Tom Sawyer plays a huge role in the climax of Huck Finn when he agrees to help free Jim from imprisonment in a shack. Tom and Huck could easily break him out in a moment, but the liberation has to happen on Tom’s convoluted terms. Day after day, Tom draws out Jim’s captivity by insisting on all the elaborate trappings of a swashbuckling adventure novel: a secret tunnel, a coat of arms, snakes and rats, a rope ladder baked in a pie—there’s even talk of sawing off Jim’s leg even though he could free himself from his chain simply by lifting the leg of his bed.

Many readers find the whole episode tedious and cruel, but the cruelty is the point. It would be easy to see the better-educated, middle-class Tom Sawyer as a lovable scamp who just wants others to share his bookish whims, but in Huck Finn he embodies a trend that Twain found troubling: the triumph of fantasy over reason and reality. Whatever the character meant to him elsewhere, Tom Sawyer is a figure of dangerous foolishness here. Wouldn’t Twain glower disapprovingly at the emergence of fandoms so all-encompassing that they inspire cosplay, cultural squabbling, and vicarious reinterpretations of history? He might have said that what our geeky age has wrought from harmless escapism will someday prove harmful to people who won’t play along. I guess we’ll see.

Jim is held captive for far longer than he needs to be because of storybook romanticism. You could see the whole Civil War in that, if you want.