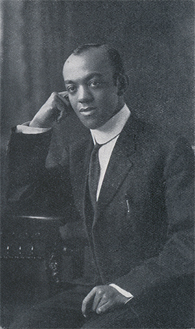 Poets pray for remembrance on the pages of an anthology—but whenever I saw Fenton Johnson’s poems in collections of African American verse, the selections were too limited for me to get a real sense of him. Fond of forgotten writers, I tracked down more of Johnson’s work to find out who he was and what he had hoped to become. My search only brought me back to his most anthologized poem, which takes on new meaning amid echoing debates about the medieval-ness of all things American.

The son of a wealthy Chicago family, Johnson earned a degree from the University of Chicago and studied at the Columbia School of Journalism. By 1913 he had self-published his first volume of poetry. Early on, he favored short, formal lyrics packed with medieval and classical references alongside Dunbar-esque dialect poems; later, he experimented (more successfully, I think) with free verse. Known to other modernists, he gathered several character sketches under the title “African Nights” and saw them published in Others for 1919: An Anthology of the New Verse.

The best of these later, more mature pieces combine the concision of poetry with a deadpan aversion to meter that keeps whimsy and sentimentality at bay. As a writer bobbing in the wake of medievalism, I particularly like this poem from “African Nights”:

There is music in me, the music of a peasant people.
I wander through the levee, picking my banjo and singing my
songs of the cabin and the field. At the Last Chance Saloon
I am as welcome as the violets in March; there is always
food and drink for me there, and the dimes of those who
love honest music. Behind the railroad tracks the little
children clap their hands and love me as they love Kris
Kringle.
But I fear that I am a failure. Last night a woman called me a
troubadour.
What is a troubadour?

The editor of The Portable Harlem Renaissance Reader called this poem “simply ironic mischief.” Yes, an educated poet is enjoying a chuckle at the expense of an unsophisticated musician who is good at what he does but has never wondered for a moment what he is. But there’s quite a bit more to the poem than that.

The banjo player moves so naturally through his own life that he never says whether the people who love his music are white or black, as if he doesn’t imagine that the details might matter. The race of the woman who calls him a troubadour is less consequential than the word itself, which baffles and frustrates him. Is she a white woman who finds him charming and associates him with primitivism and archaism, or is she a black woman, perhaps an aesthete or would-be patron, who hopes to elevate a purveyor of folkways by using European terms? For the banjo player, pondering these complications could lead to troubling realizations about the world.

Johnson’s poem raises a larger question that gnawed at him, one that also occupied the poets and artists of the Harlem Renaissance: What relationship do African Americans have with European-derived civilization, and vice versa? There are also questions here for critics and scholars: Does too much thinking about form and taxonomy take all the fun out of art? Compared to audiences who react to his music with joy, is the woman who responds cerebrally missing the point?

The banjo player’s confusion over the word “troubadour” reminded me of the movement in medieval studies to promote a “global Middle Ages.” While I think it’s smart for medievalists to look beyond Europe, which hardly had impervious or easily defined boundaries back then, I find it odd that people in a field with bowstring sensitivity to the legacy of colonialism would talk about “medieval” Africa and “medieval” Asia, as if terms that mark the European timeline are an easy fit on other continents. (Alas, the promo copy on the back of my Charlemagne book refers to “medieval Baghdad.” Can’t win ’em all.) Likewise, a black American man who plays the banjo, an African-derived instrument, is not a medieval troubadour, even though the two are obvious artistic kindred. Is the woman failing to see the banjo player and his traditions on their own terms? If so, then what is she, despite her attempt at a compliment, not seeing?

In the 1922 edition of The Book of American Negro Poetry, James Weldon Johnson noted only that Fenton Johnson “is a young poet of the ultra-modern school who gives promise of greater work than he has yet done.” In a later edition in the early 1930s, he honed his critique, describing how Fenton Johnson had

disregarded the accepted poetic forms, subjects, and language, adopted free verse, and in that formless form wrote poetry in which he voiced the disillusionment and bitterness of feeling the Negro race was then experiencing. In some of this poetry he went further than protests against wrong or the moral challenges that the wronged can always fling against the wrongdoer; he sounded the note of fatalistic despair. It was his poetry written in this key that brought him recognition. The central idea of this poetry was startling. Doubtless its effect was in some degree due to the fact that it was an idea so foreign to any philosophy of life the Negro in America had ever preached or practiced. Fenton Johnson is the only Negro poet who has ever sounded this precise note.

Nine decades later, it’s no longer true that Fenton Johnson alone among African American writers gave voice to despair, but James Weldon Johnson makes his poems sound like a dead end. They’re not. Time has offered them new life and fresh possibility, especially if we give them room to be personal reflections rather than only pronouncements about race.

Read “The Banjo Player” again, and note how the wandering musician defines success as pleasing other people. Sure, that can be a metaphor for African American experiences, but it’s also a sigh of frustration from a poet who never achieved major success and eventually stopped writing for publication. “It seemed to me like trying to walk the Atlantic ocean to obtain recognition in the literary world and especially when one was attempting to present the life of the race to which I belong,” Johnson lamented in 1920 after writing three books of poetry, publishing a doomed magazine of his own work under different pen names, and founding a largely imaginary movement for racial reconciliation. He would soon sell five poems to Poetry magazine, but his pessimism was prescient. “I know that my dream of success in literature is fading,” he confessed, “because every story I have ever offered a standard magazine has returned to my desk.”

Who are we if no one pays heed to our work? Fenton Johnson knew: Writers and artists dread the exhaustion of misunderstanding and hate the ache of indifference, no matter where or when they lived, regardless of what you believe you should call them. 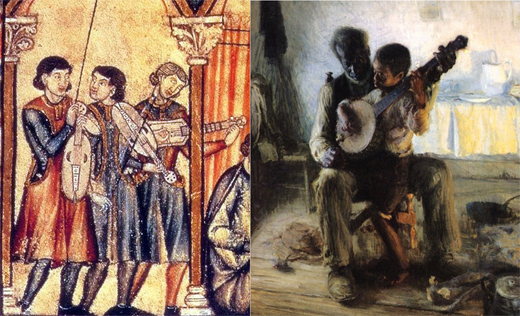 5 thoughts on ““I can’t get unwound, why do I throw myself into the night…””