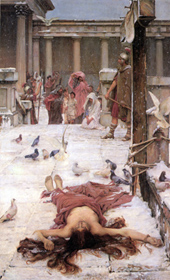 A knight sliced in half like a sesame bagel, a saint tossed down a hillside in a barrel lined with nails—pain is an ageless wellspring of humor, but we were too weirdly willing to laugh. As graduate students, we were honing our sense of which aspects of the Middle Ages were born of certain eras and places and which others were timelessly human. Yet something about the classroom made the medieval world harder for me to imagine. The line of scholars whose work helped us understand the past in the first place also stood in the way of a gut-level sense of real people’s lives. Then the violence was never real, only a source of other people’s pictures or words, like an idealized painting or flippant cartoon.

That changed in our second year when we studied an account of the martyrdom of St. Eulalia of Merida by the fifth-century poet Prudentius. Even though Eulalia’s faith emboldens her to taunt her tormentors and laugh off her own suffering, the descriptions of her mutilation are horrifically clinical. As a class and on our own, we translated each of the poem’s 215 lines, sobered to find that two years of Latin had brought us to such a repellent place. What made Eulalia’s martyrdom different was that we didn’t merely read words on a page. We hoisted huge dictionaries, paged through grammars, flipped through stacks of handouts, trudged across campus to recite the Latin verse and our graceless English, and tensed up when called on to read. It may have been faint, but we felt something real in our muscles and bones, a memory carried for twenty-odd years.

Last month, our town hosted a ceremony to remember one of the worst things that ever happened here, the lynching of a black man. He was accused of attacking a young white girl, but a mob denied him the justice of a trial. Not long ago, elderly locals might have heard enough from their parents to be able to name the killers or point out the dead man’s grave. Now, except for snippets from scanned newspapers, the victim is as distant as a figure in a medieval text, a fictional character rather than someone who lived.

The site is still there, just a few long strides from the main intersection. It’s eerily open, like the grassy remnant of a battlefield declared sacred only after the rest has been paved. Locals say that within living memory, a storm blew down a massive locust tree; it may have been the makeshift gallows. The church across the street hasn’t changed, except for a gravel lot for cars where the congregation used to park horses and wagons. Families arriving for Sunday services the morning after the lynching could not fail to notice the constable cutting down a corpse.

I’ve toured historic homes that looked as if their famous residents had just stepped out for lunch. I’ve stood at sites where thousands died, and others where worn-away ruts in the ground begged the imagination to run reckless over the post-holes of hill-forts and mansions. Those places made me think, and think, and think. At times, though, I wanted to feel something more. No matter how many years I hewed and hacked through ninth-century sources, not once did I hear the eldritch murmurings of kings or monks or sense a spectral hand on my shoulder. History was dead; my job as a writer was to gather and narrate its traces.

I was leery of the plan to take soil from the lynching site. The act sounded too pious and medieval, like sifting for relics to venerate, or too frivolous and modern, like filling a keychain with sand from the beach. Even so, the morning before the ceremony, I drove to the field with a shovel and spade and met others tasked with preparing the site. The ground was pliant from days of rain, so with no special reverence, I peeled up one of four grassy squares and loosened the dirt underneath. When I looked up, kids in pickups still drove to McDonald’s for breakfast, and tractors kept on rolling out of town toward the last shriveling fields of the year.

On the next day, a cold, cloudless Sunday, more than a hundred onlookers formed a crescent around the gazebo next to the church. Some of us don’t have deep roots here, but scattered among us, and settled unknowingly in nearby houses, were descendants and relatives of everyone whose lives converged on that spot in 1880: the men who raised the lynch mob; former slaves who knew the victim; the constable who tried in vain to stop the murder; and the black congregation that claimed the body and laid it to rest. Ashes and dust—our past and our future, summoned to gather in flesh and blood, shifting uneasily at the story retold. 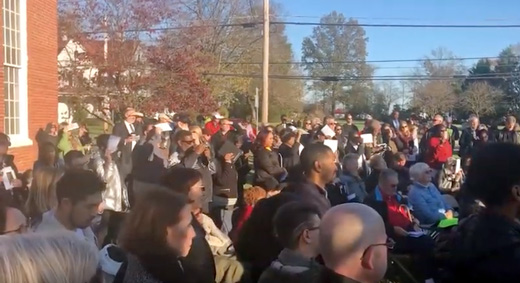 After a benediction, a proclamation, speeches, and poems, we turned from the churchyard and crossed to the field. Squinting in the stark, clarifying sunset, people lined up to scoop soil into jars. Some filled small canisters of their own. The motion and effort made sense; no one was left to chase around their windblown thoughts. The ground gave everyone something to do, exertion their bodies might feel and remember.

An event that began in mourning and solemnity concluded with hugs and handshakes and an unforeseen lightness of heart. No ghosts hovered near us or stood by the roadside and watched. The veil of the past hadn’t risen or torn, but the chasm between old, unacquainted truths was maybe no longer so wide. Justice for the dead isn’t ours to bestow, but empathy for those who suffered, whether a century or a thousand years ago, can make a field full of strangers tremble as one, if they do more than offer up words. If you wait half your life and the earth doesn’t move, don’t just stand there. Move it yourself.

2 thoughts on ““Break all the windows in the cold, cold ground.””