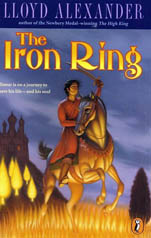 In 1997, when Lloyd Alexander channeled his enjoyment of the Mahabarata and the Ramayana into his own original work of fiction, he promised “a feast of many flavors: high adventure, poetic romance, moments of wild comedy and dark tragedy, anguish at promises broken, joy at promises kept.” The resulting novel, The Iron Ring, recasts the world of Indian epic while arguing against the glorification of the warrior ethos that typically defines the epic hero. A less skilled storyteller might have produced a fumbled pastiche of Indian exoticism while failing to do justice to his sources, but Alexander spent a lifetime thinking about what he called “our universal heritage of story.” Mindful of the constants of human experience, The Iron Ring is a worthy return to one of Alexander’s great themes: how our moral choices determine who we turn out to be.

Tamar, the young king of Sundari, is decent but untested. When a strange traveler exploits Tamar’s hospitality and challenges him to a game of dice, the naive king ends up wagering his life—and quickly loses it to his opponent. Tamar must then make good on his debt by abandoning his own kingdom and seeking the homeland of his mysterious visitor. To Tamar’s shock, a black iron ring appears on his finger, a token of his rashness and a symbol of the questions that vex him: How are the responsibilities of a warrior different from those of a king? Are we beholden to the moral and ethical codes dictated by our place in society, or are we free to heed our individual consciences—and if so, at what cost?

As Tamar stumbles toward enlightenment, he attracts, as most Alexander heroes do, an unlikely group of friends: a high-minded brahmin, a devious monkey king, a disheveled and neurotic eagle, a clever milkmaid, and a usurped king who longs to reclaim his throne. Most of these characters are types familiar to readers of Alexander’s other novels, but The Iron Ring unfolds according to rules of its own. The injustice of the caste system and the characters’ obsessions with their own dharmas ensure that this pseudo-India is more than just Prydain in exotic trappings, even as Alexander suggests that love, loyalty, and friendship transcend the systems of honor and social standing that threaten to constrain the best aspects of human nature.

Disarmed by the whimsical birds, bears, brahmins, and monkeys who exchange humorous banter, the reader of The Iron Ring soon sobers up as Alexander gently explores the manifestations of the divine in our daily lives and paints a disquieting portrait of the chandalas, the wretches who wash and cremate the corpses of paupers. When Tamar joins the war to help the noble Ashwara regain his kingdom, The Iron Ring also considers the morality of the battlefield, a place that to Alexander is always chaotic, vivid, terrifying, and deeply personal:

The little worm of fear stirred. It was still alive. It had only been sleeping. Tamar shuddered so violently he could scarcely grip his blade. Ashwara’s warriors were grappling hand to hand with their attackers. There were no ranks, no formations, only swarms of figures that broke apart and clashed together again. Someone had begun shouting “Sankula! Sankula!” The cry spread: one voice, then another. The whole camp seemed to heave like a single, convulsing body.

“Sankula!” Roaring, cursing warriors flung aside broken weapons or ripped at opponents’ faces with jagged ends of shattered blades, clawing, kicking, gouging—it was all sankula. Tamar ran blindly on. Haskhat at his heels, he lunged through a thicket of flailing arms and legs, struggling to reach Ashwara’s tent. Free from the press of warriors, he sped across a patch of empty ground, lost his footing in a slick of mud, and pitched headlong. When he realized it was not mud, he promptly threw up and continued doing so until his stomach turned inside out.

Choosing fear over bravery and compassion over violence, Tamar confronts a new and more profound question: “Can any man kill and keep his heart pure, or is all slaughter alike?”

In the early 1980s, Alexander used his Westmark trilogy to explore how even a justifiable killing can haunt and compromise the killer. Fifteen years later, in The Iron Ring, he offers a more idealistic model for moral maturity, urging his young readers to be merciful, generous, and self-critical even if their peers expect them to behave otherwise. That moral decisions sometimes lead to heartbreak rather than happiness is a difficult truth that Alexander never denies; the losses suffered by characters in The Iron Ring implicitly affirm it. Tamar’s friend Adi-Kavi notes it more directly: “Astonishing how you can vex so many people all at once,” he concludes, “by simply being what you are.”

3 thoughts on ““Talk and song from tongues of lilting grace…””