Spring is a time to remember Walahfrid Strabo: abbot, scholar, tutor to Charlemagne’s grandson, and the best known gardener of the Carolingian age. He’s memorialized at the National Cathedral garden (and got a poem of his own in Looking Up), and his 444-line poem De Cultura Hortorum, “On the Cultivation of Gardens,” intermingles plant lore, political allegory, practical advice, and philosophical musings with an exhortation to get out there and work:

For whatever the land you possess, whether it be where sand
And gravel lie barren and dead, or where fruits grow heavy
In rich moist ground; whether high on a steep hillside,
Easy ground in the plain or rough among sloping valleys—
Wherever it is, your land cannot fail to produce
Its native plants. If you do not let laziness clog
Your labor, if you do not insult with misguided efforts
The gardener’s multifarious wealth, and if you do not
Refuse to harden or dirty your hands in the open air
Or to spread whole baskets of dung on the sun-parched soil—
then, you may rest assured, your soil will not fail you.
(trans. Payne)

In the March and April dankness, I followed Walahfrid’s example—and today I reaped the year’s first harvest from my little realm of dirt. 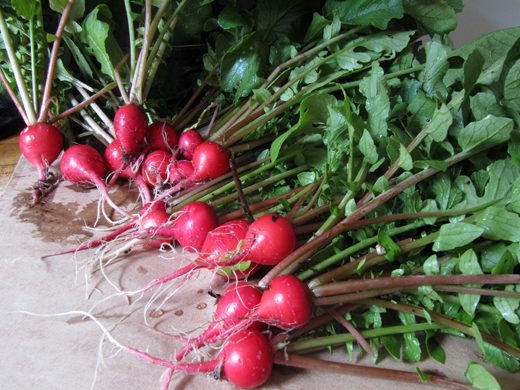 I checked to see if Walahfrid had anything to say about radishes. Indeed he did:

Here’s a loose and hasty translation into pseudo-Anglo-Saxon alliterative verse:

Powerfully rooted,   it raises the vaults
Of its broadening leaves    and lies waiting,
The radish you find   in the final row.
Its flesh-root shortens    that shattering cough,
Or grind up a draught    and drink the seeds:
That dose often    will do the trick too.

Walahfrid died in A.D. 849 while trying to cross the Loire. He was only in his early thirties, but he seems to have grown to prefer plants to politics—an insight rare in places of power, then and now.

2 thoughts on ““When I’ve walked in the garden, when I’m walking offstage…””