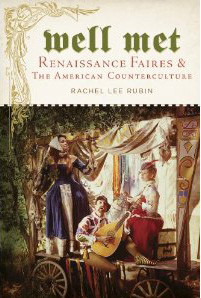 What hath the Renaissance faire to do with psychedelic rock? The vogue for “world music”? The frilly shirts of Jimi Hendrix? The rise of craft breweries? The House Un-American Activities Committee? Before reading Well Met: Renaissance Faires and the American Counterculture, I hadn’t thought to ask—but Rachel Lee Rubin’s book is a useful reminder that pseudo-medieval pursuits are sometimes more about the present than they are about the past.

Rubin starts with the basics: how the first faire grew out of a children’s commedia dell’arte troupe organized at a California youth center by teacher Phyllis Patterson. In May 1963, Patterson and others organized the first “Renaissance Pleasure Faire and May Market” as a fundraiser for left-wing Pacifica Radio, drawing more than 3,000 revelers to a North Hollywood ranch. Associated with hippies and drugs by local detractors, the event quickly outgrew Pacifica. It spawned its first imitators in Minnesota and Texas in the early 1970s; more than 200 Ren fests of varying sizes now thrive across the United States.

So how did a countercultural crafts-and-music romp evolve into a nationwide subculture overseen, in some cases, by a large entertainment corporation? Well Met doesn’t chart the growth and commercialization of the Ren faire. Instead, Rubin has two goals: to explain “the ways in which various forms of cultural expression ‘tried out’ first at the faire became recognizable staples of American social and cultural life,” and to restore the Renaissance faire to a central place in the history of the counterculture. Once I got past my initial disappointment that the book wasn’t a history, I was won over by Rubin’s argument for the importance of the Renaissance faire to the culture of the 1960s and 1970s—and its long-overlooked ubiquity.

Her evidence is legion: how the Los Angeles Free Press began as the Ren faire newspaper; how Americans, who now consume beer from nearly 2,500 craft breweries, first sampled ale at the faire; how fashion choices and even the typefaces on psychedelic album art recall early faire fliers; how the faire anticipated renewed markets for handmade crafts and set precedents for large outdoor rock concerts; how occasional faire-goer Michael Jackson mimicked the moves and style of faire mime Robert Shields; how the Flying Karamazov Brothers, the Firesign Theater, and Penn and Teller all got their start at Ren faires; and how the faire coincided with a Middle Eastern cabaret boom in California that helped build an audience for international music. Rubin even suggests that the Ren faire helped revive interest in the klezmer. Who knew?

Although Well Met is packed with wonderful “aha!” moments, the book does wander. Sometimes, disorganization drives Rubin to interesting places, as when she asks black faire-goers and plus-sized women about their experiences, or when she randomly chats up knights and wenches about the faire as a gay-friendly environment, a refuge for misfits, and an escapist haven where costumes deliberately obscure real-world class signals. At the same time, there’s way too much detail about the history of a couple of psychedelic bands, and a chapter about Ren fests in fiction feels like a conference paper brought in to serve as padding. It’s particularly jarring when patches of academic jargon turn up in such an accessible and pleasantly written book, as when Rubin muses on “the ways in which the faire has enabled (perhaps paradoxical) strategies of resistance to the very forces of corporatism and cultural centrism that have inexorably resituated it in the American expressive landscape.” Surely there’s a less turgid way to say that.

Well Met also frustrated me with the tantalizing questions it doesn’t ask. Rubin mentions conservative critics of those first California Ren faires, but she provides almost no information about or firsthand commentary from them. Why not? Did neighbors’ complaints about traffic, drugs, and crime have no validity? Picking though pseudonymous rants on message boards and blogs, Rubin devotes one chapter, shorter than the others, to “Hating the Faire.” She catalogs all the usual gripes about Ren faires, pointing out that accusations of nerdish celibacy exist alongside the contrary complaint that faires are over-sexualized. But are there no valid criticisms of Ren-faire culture beyond the ones Rubin handily swats down? Are the only disillusioned folk the wistful souls who wish the faire were as spontaneous and uncommercial as it was in the ’60s? Are there credible witnesses to the dark side of faire life? What does it mean that so many faire-goers told Rubin they’re “working class,” and can we trust their self-reporting? Rubin sometimes seems so charmed by Ren-faire subculture that it delights the cold spirit of scholarly inquiry right out of her.

Of course, I’m in danger of faulting Rubin for the book she didn’t write, when she’s clear about the purpose for the one she did. Perceptive and engaging, Well Met proves something the rest of us shouldn’t have missed: that the Ren faire isn’t an isolated cultural strand but a subculture that’s more interwoven with the rest of American life than even many faire-goers appreciate.

Well Met also answers, mirabile visu, a question that’s long nagged me: Why the heck aren’t they called “medieval faires”? According to Rubin, co-founder Phyllis Patterson did pitch the first faire to Pacifica Radio as a medieval-style open-air festival, but “[a] lawyer on KPFK’s board reportedly objected on the grounds that human rights in medieval Europe were so few, so Patterson swiftly suggested calling it a ‘Renaissance Faire.'” I appreciate Rubin digging this nugget out of a book of historic photos; even if Well Met doesn’t answer all of my questions, it does answer several I hadn’t known to ask—a rare feat for a cultural-studies book from an academic press, and well worth a hearty huzzah.